Smart Shoe for Diabetic Neuropathy Gets a Tech Upgrade

In 2012, Siddharth Nair’s mother started developing symptoms of diabetic neuropathy. The condition rapidly spread through her legs, leaving her nearly paralyzed. She tried supplements to help treat neuropathy but noticed no improvements. The physiotherapy treatment option was prohibitively expensive. Even if she could afford it, transportation to and from therapy presented another hurdle.

“The [MedTechnovation] program was about identifying and supporting early-stage innovators in healthcare who are building tech solutions to solve India’s healthcare problems.”

“We would need someone to take my mom to the physiotherapist, wait for her, and then take her back home,” says Nair. “In a city like Bangalore, where the traffic is crazy, it was almost impossible.”

Nair, a biomedical engineer, decided to create an alternative treatment option for his mother. He founded Xfinito Biodesigns to build a medical device to help people with neuropathy regain the use of their bodies.

To advance and expand his startup, Nair applied to the 2020 MedTechnovation challenge. The challenge, from the Dayananda Sagar Entrepreneurship Research & Business Incubation Foundation (DERBI Foundation) in partnership with MathWorks™, sought to elevate promising medical device startups.

“The program was about identifying and supporting early-stage innovators in healthcare who are building tech solutions to solve India’s healthcare problems,” says Lakshmi Jagannathan, chief executive officer of DERBI.

Out of more than 100 applicants, judges selected Xfinito Biodesigns and 10 other startups to receive grant money, incubation at DERBI, and technical support from the MathWorks accelerator program. The judges chose Xfinito not only for its novelty and potential to help others, but also for the inspiring story motivating its mission.

Nair’s mother had diabetes for quite a while before more serious symptoms emerged. She began losing her vision, a complication of the condition, and underwent surgery to save her sight. But just three days after the procedure, neuropathy began in her legs. It advanced quickly, and within a few more days, her legs went numb.

“This footwear is an intelligent system that senses foot pressure, foot temperature, a person’s gait, and neuromuscular response to vibration or thermal or electrical stimuli.”

Nair saw that the supplements his mother took did little, if anything, to treat her symptoms. Having studied bioengineering in college, he wondered whether he could create a solution for his mother.

“That’s when I took a plunge,” he says. “I left my job and started my master’s degree so that I could access labs to develop a tool that could help her.”

At graduate school, he had everything he needed to create a therapeutic device for his mother. For his dissertation, he experimented with neuromodulation, which involves delivering stimuli such as heat, vibration, or electric stimulation to improve nervous system function. His dissertation project provided a rehabilitation solution for hemiplegia, paralysis of one side of the body, and Nair extended that work to build a device for his mother.

Nair’s prototype neuromodulation device stimulated nerves with electrical pulses through the skin to improve nerve function. After testing it on himself to ensure the device was safe, Nair asked his mother to try it. “She had given up hope because she had suffered for more than a year, and nothing was working,” says Nair. His mother agreed to give his device a try.

“She was a little disheartened when she couldn’t feel anything the first time she tried it,” says Nair. “For the first four weeks, she didn’t have any kind of reaction to the neuromodulation stimulus. Then her legs started to respond.”

Now, eight years later, his mother can walk and complete her everyday tasks. She is also a cofounder of Xfinito Biodesigns, which aims to bring this technology to market. “She is helping us with accessibility design and looking at her own disability differently,” says Nair. That includes building an online, anonymous support group platform managed by people with disabilities to offer alongside the neuromodulation product.

The product, Xeuron.ai, is an intelligent platform focusing on consumer neurotechnology for medicine, holistic wellness, sports, gaming, and enterprise applications. As a medical application, the platform offers disease management for neurodegenerative diseases, including prevention, monitoring progression, targeted treatment, and clinicians’ decision support system. It aims to monitor and prevent complications from conditions such as diabetic neuropathy. “The foot is the first to be affected in many cases, leading to foot ulcers,” says Nair. That’s why the first wearable prototype in the Xeuron.ai platform takes the form of a smart, sleek sneaker equipped with electrodes and sensors inside.

Aside from diabetic neuropathy, the device has applications for other neurodegenerative disorders. Nair says they can implement the system in wearables other than footwear and customize it to meet the needs of people with conditions like Parkinson’s and Huntington’s diseases.

“This footwear is an intelligent system that senses foot pressure, foot temperature, a person’s gait, and neuromuscular response to vibration or thermal or electrical stimuli,” says Nair. “We look at neuromotor activities and reflexes.”

Its design makes Xeuron unique among medical devices. Recently, Xfinito and Xeuron.ai caught the eye of a famous footwear designer. Mohammed Ehsan, who designed shoes for movie celebrities and cricket stars, contributed to creating the wearable.

In fact, Ehsan might wear it one day. “The reason he’s helping us is because he has Parkinson’s disease,” says Nair. “He started supporting us and allowed us to do a good job with this footwear.”

Not only could Xeuron.ai improve outcomes for people with neuropathy or other neurological conditions, but it could also improve access to care. With constant data collection from the footwear and the potential for patients to share data with their doctors, patients won’t need to worry about taking time off work or finding transportation to attend frequent appointments.

Stepping Into the Future with Artificial Intelligence

Over the past few months, mentors and experts from DERBI and the MathWorks technical mentorship program have supported Xfinito Biodesigns. This support helped Nair advance Xeuron.ai technology years beyond his original projections.

With MATLAB®, Nair has created more sophisticated software to govern Xeuron.ai’s functions. Xeuron.ai records information from the wearable, such as pressure, temperature, response to stimuli, and motion. Deep learning algorithms process the data. This processing happens through hybrid computing, which Nair says brings down both costs and computing time. In response to this data, the system delivers personalized therapy through electric or magnetic stimuli, vibration, or thermal or light pulses.

Using Simulink®, Nair and his team are developing digital twins with the data the footwear records, creating a virtual model, or digital avatar, of each user. “This will help us understand the physiological characteristics of each person using our platform,” he says, which could enable them to predict outcomes, further customize treatment, and potentially stop disease complications from developing. Additionally, the technology enables the user to visualize their digital self over time by measuring the improvements or conditions qualitatively and quantitatively through digital visualization.

“Because of the technical mentorship program and our experience with MATLAB and Simulink, we could accelerate our intelligent development.” 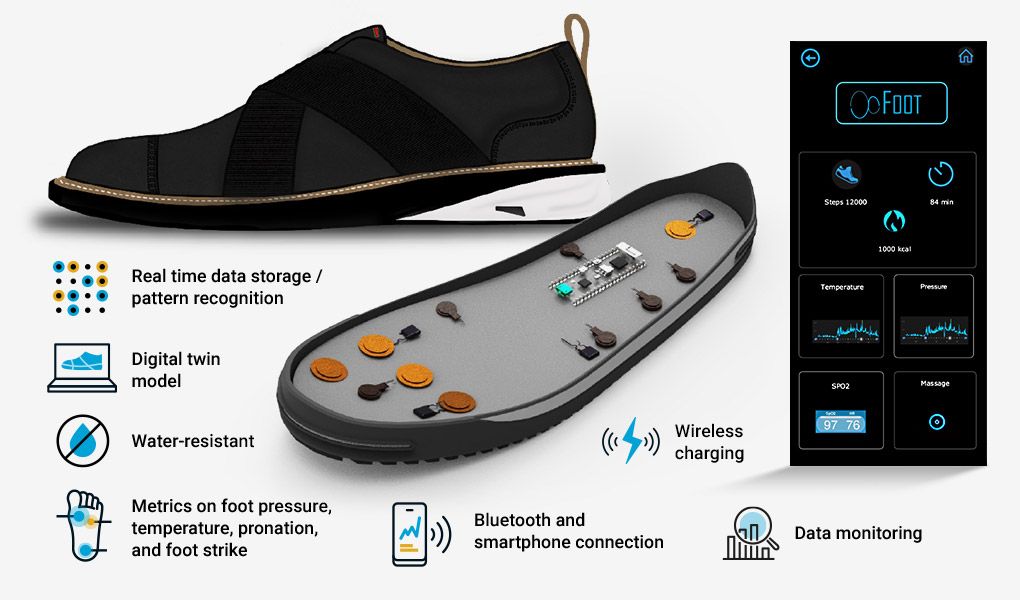 Nair also envisions partnering with clinicians who will use this data to inform treatment. “A clinical scientist monitors the data, and if they see an anomaly, they connect the doctor and patient,” he says, enabling the doctor to improve treatment in real time.

Nair plans to expand Xfinito Biodesigns’ reach. With DERBI and MathWorks resources, he now has the tools to do that. “Because of the technical mentorship program and our experience with MATLAB and Simulink, we could accelerate our intelligent development,” he says.

The support from MathWorks greatly fast-tracked the platform development for Xeuron.ai. Nair hadn’t planned to work on the AI components of the system at this time, but MATLAB and Simulink enabled his team to get started with advancements they thought were still a few years away.

Now, Xfinito Biodesigns is filing patents for the various components of the Xeuron.ai platform and developing the clinical app to inform doctors’ treatment plans. So far, Nair says both doctors and patients have given his team positive feedback.

Beyond the considerable medical benefits of the technology, Nair also sees an opportunity for social impact. “Two things that are most important to me are one, providing good footwear for children and older adults in communities living below the poverty line, not only in India but around the globe,” says Nair. “And two, setting aside some of the proceeds to help in training and up-skilling disabled people.”

Jagannathan says incubation at DERBI and the technical mentorship program strengthened Nair’s startup, giving him the tools to validate his solution for communities in India and beyond. “It starts with solving a local problem,” she says. “But this program has helped him widen his horizons and think bigger and better.”