Use Model-Based Design to model, simulate, verify, and generate code and documentation for the control and protection systems

“Using Model-Based Design we developed a complex control system in significantly less time than our traditional process would have required. We eliminated months of hand-coding by generating code from our models, and we used simulations to enable early design verification.” 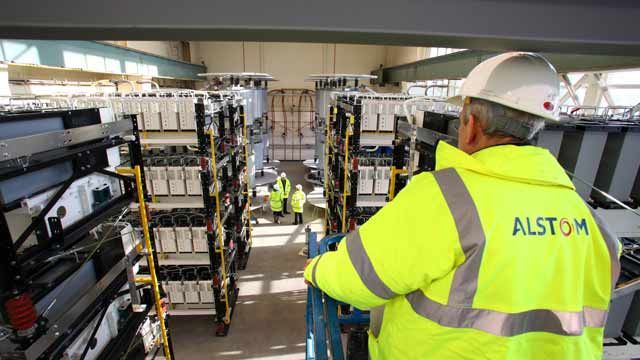 Alstom Grid’s HVDC demonstrator system with power converter modules. The improved controllability of the VSC in this system makes it well-suited for smart grid applications.

The line-commutated converters commonly used today require multiple filter banks, which can be expensive and quite large. For HVDC applications that need compact site layouts, such as offshore and onshore wind farms where space is limited, voltage source converters (VSCs) provide a better solution.

“To develop such a complex system, our systems engineers needed to verify the design as early as possible,” says Totterdell. “In the past, we sometimes found design and implementation issues late in the project, when we were ready to test on a real-time simulator.”

With wind farm and smart grid demand increasing worldwide, Alstom Grid saw a market opportunity that would demand an aggressive production schedule. “Our goal was to get from concept to a complete demonstrator in 24 months,” explains Totterdell. “To meet this timeline, we needed to accelerate the software development process while minimizing the number of coding errors found late in the process.”

An Alstom Grid Senior Fellow developed the conceptual design with Simulink and Stateflow®. Using Simulink and Simscape Electrical™, he also built a plant model that included an AC grid connection, transformers, and loads, as well as insulated gate bipolar transistors (IGBTs) and capacitors for the lower-level power electronics submodules.

To verify the control design and plant model functionality, Alstom Grid engineers ran closed-loop simulations in Simulink. Next, they refined the control algorithms in preparation for deployment to a real-time target.

To help manage the system’s complexity, Alstom Grid engineers used Simulink model referencing to partition the model into library blocks that corresponded to the DSP hardware on which the components would be deployed. They added interfaces between blocks, converted the model to discrete mathematics, and switched from a variable-step to a fixed-step discrete solver.

Finally, the engineers ported the control algorithms to the production hardware for the 24 megawatt demonstrator and verified that it operated as designed.

The demonstrator system is currently in operation, and is receiving positive evaluations from prospective customers.