"MATLAB provides a combination of matrix manipulation and visualization capabilities that are key to our imaging work." 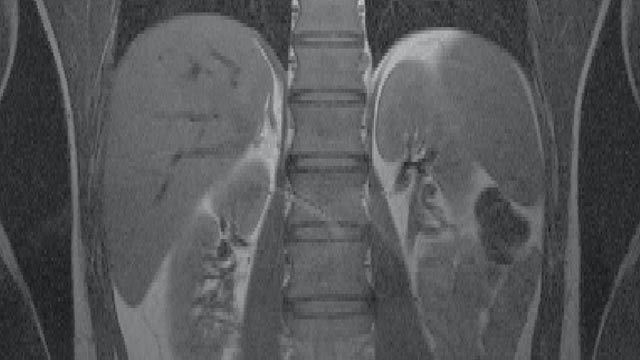 SMASH image of the chest and abdomen, reconstructed from MR signal data.

Doctors rely on MR (magnetic resonance) scans to acquire high quality images of the inside of the human body. Current MR scanning methods can be time-consuming and produce unclear images, especially in cardiac MRI (magnetic resonance imaging) and other scans for which patients must hold their breath.

Beth Israel used MATLAB, the Image Processing Toolbox, and other MathWorks products throughout the development of SMASH. "MATLAB provides a combination of matrix manipulation and visualization capabilities that are key to our imaging work," says Dr. Daniel Sodickson, director of the Laboratory for Biomedical Imaging Research at Beth Israel Deaconess Medical Center.

The Beth Israel researchers set out to develop a safe, effective way to improve MRI resolution and speed. Previously, MR signals were acquired one point and one line at a time, with each line of data requiring a separate application of magnetic field gradients and RF pulses. Imaging speed was thus limited by the maximum field switching rates of conventional scanner technology.

Dr. Sodickson theorized that MR imaging could be accelerated if signals were acquired in parallel rather than sequentially. This approach would involve arranging multiple RF detectors so as to obtain many lines of data at once. The researchers needed to determine which detectors to use and where to place them. They then needed to extract raw information from the MR scanner, combine data from the different detectors, and reconstruct the accelerated images.

The Beth Israel team developed subroutines in MATLAB to test their SMASH theory. “Having access to the linear algebra algorithms in MATLAB enables us to very quickly visualize the imaging process,” says Sodickson. “The ability to take apart a transformation and look at each of the intervening steps was one of the more appealing features of MATLAB for us.”

They began simulating the kind of data that they would get from an MR machine with a standard set of RF detectors by converting the raw data from the scanner into frequency components. They developed subroutines to modify the frequency data based on sensitivity patterns created by the detectors.

They then used simple MATLAB algorithms to reconstruct their first accelerated images. “The Image Processing Toolbox came in very handy when we began visualizing these images,” Sodickson says. “I like the access to low-level data and mathematics. We were not just pushing around images, but had access to the intermediate steps, and could even visualize what we were doing to the data in the process of generating the image.”

Using MATLAB, the researchers then developed a GUI that lets users simulate different detector arrangements, geometries, and configurations. They also used MATLAB to build other programs and GUIs that reconstruct clinical images and let clinicians compare stacks of images in various ways. The clinicians can also change the contrast and brightness of the images—a crucial step for MRI radiologists.

The researchers plan to use the MATLAB Compiler to develop standalone versions of their parallel imaging software to run on clinical workstations.