"MATLAB enables young biologists to learn enough programming and math without being afraid of the code. They can write in MATLAB as if it were English." 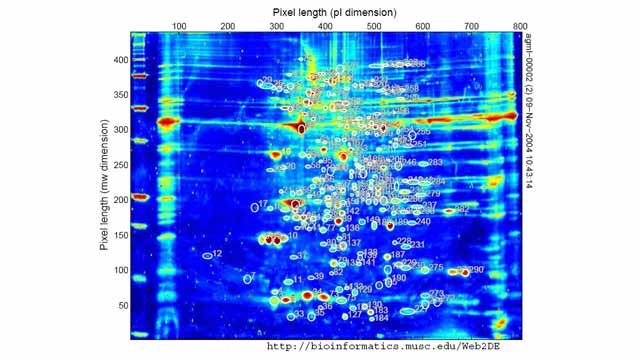 Advances in molecular biology are producing unprecedented amounts of data. The data contains a wealth of information about the structure and dynamics of genes, proteins, and metabolites, but to extract and interpret that information, researchers must combine emerging theories with computational methods and mathematical models.

Researchers in the Department of Biostatistics, Bioinformatics, and Epidemiology at the Medical University of South Carolina (MUSC) use MathWorks tools to incorporate genomic and metabolic data into systems models for testing hypotheses. The university also uses MathWorks tools to support a number of the department’s research initiatives in genomics, proteomics, and bioinformatics, such as systems biology, metabolism modeling and mutivariate statistics.

"The drive for algorithm identification is rooted in biology, and so our biologists must develop fast-prototype applications,” says Dr. Jonas Almeida, associate professor of Bioinformatics at MUSC. “MATLAB provides a user-friendly environment that enables us go from theory to application quickly and painlessly.”

The environment would need to integrate with their existing web technologies, open-source software, and data from the National Center for Biotechnology Information (NCBI).

Because life scientists often lack experience with mathematical modeling software, the environment would also need to be easy to learn and use.

After considering a number of commercial and open-source mathematical modeling tools, the group chose MATLAB® for its ease of use, interoperability, industry acceptance, and rich modeling and computational capabilities.

Research teams within the group use MATLAB to develop applications for genomic and proteomic analysis such as biomarker identification, two-dimensional gel analysis, and artificial neural networks. They make these packages available to other groups and the scientific community via the web using the MATLAB Web Server.

MATLAB, Statistics and Machine Learning Toolbox™, and Optimization Toolbox™ provide the foundation for much of the group’s work. “MATLAB is at the core of our ability to function. And everything we do uses Statistics and Machine Learning Toolbox. We also use Optimization Toolbox for numerical decoupling by tracing state variables with neural networks in conjunction with genetic algorithms,” says Almeida.

The group uses Bioinformatics Toolbox™ to simplify sequence alignment using Needleman-Wunsch and Smith-Waterman algorithms. The toolbox also enables them to normalize, visualize, and import microarrays, including data from NCBI’s Gene Expression Omnibus. They also use the SOAP client in MATLAB to interact with local and public data on the Internet.

In the area of biochemical system theory, researchers use Symbolic Math Toolbox™ to numerically decouple and recast systems of nonlinear differential equations.

They also use MATLAB to make system calls to other open-source technologies, including the PostgreSQL database and the statistical package R, and parse the results.

“There is a strong bias in the bioinformatics community for open-source tools, but we really believe MATLAB is comparable to an open-source tool because the code we develop has an open architecture, so anyone can see the source code,” says Almeida. “I can’t ever remember one of my reviewed papers not getting accepted because I used MATLAB.”

Medical University of South Carolina is among the 1300 universities worldwide that provide campus-wide access to MATLAB and Simulink. With the Campus-Wide License, researchers, faculty, and students have access to a common configuration of products, at the latest release level, for use anywhere—in the classroom, at home, in the lab or in the field.