Use Model-Based Design with MATLAB and Simulink to model electrical power and control systems, run simulations, and analyze the systems’ response to outages

“An important benefit of Model-Based Design at OMRON is that it enables large teams of hardware, software, and control design engineers to work together to develop advanced products by using plant and control system models in a single environment.” 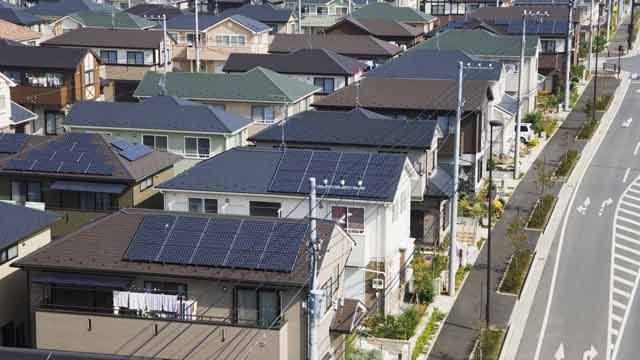 Solar power generation systems installed in homes and businesses continue to generate electricity even when electric power supplied by the grid is interrupted. This condition is known as islanding. If not stopped immediately, islanding can endanger workers repairing power lines, who may not know that some lines are still powered. Traditional anti-islanding mechanisms reduce this risk, but when several systems are installed close together, interference can cause these mechanisms to fail.

To address this problem, OMRON has developed AICOT—anti-islanding control technology that enables the rapid detection of power outages to prevent islanding even when hundreds of solar power generation systems are installed close together. OMRON engineers used MATLAB®, Simulink®, and Simscape Electrical™ to develop this patented technology.

“Simscape Electrical enabled us to model and simulate the frequency changes that occur on the electrical grid when an outage begins,” says Masao Mabuchi, chief specialist of technology at OMRON. “We developed control algorithms in MATLAB and Simulink that rapidly respond to these changes, and ran closed-loop simulations with our Simscape Electrical model to ensure that the algorithms would support the safe operation of solar power generation systems in high-density areas.”

To comply with government standards, in single-unit tests a solar power generation system must detect a grid failure within one second, and in multiple unit tests inverters must be shut down within five seconds. Detecting islanding by monitoring the voltage change of the electrical grid is difficult. In addition to being slow, the performance of solutions that used this approach was compromised by interference between solar inverters installed close together.

OMRON sought to design a controller that would detect outages via frequency changes rather than voltage changes. Developing and testing the controller using actual plant hardware was not feasible because the controller would need to be verified under conditions that are either difficult or unsafe to replicate.

The group modeled the controller, including the failure detection algorithm, with Simulink and Control System Toolbox™, using Stateflow® to model the condition branching and setting of the CPU.

Working in Simulink, the team performed simulations of the control model and plant model in which they adjusted the balance of electrical load and power generation and analyzed changes in the electrical grid’s frequency when an outage occurs.

The team developed a MATLAB script that calculates active and reactive power from the measured voltage and current of the actual equipment. They used this script to validate the controller output. They provided the script to companies that evaluate solar power generation systems so that technicians could test and analyze failure detection times.

The completed AICOT system can detect an islanding condition in less than 0.2 seconds.

AICOT-equipped solar inverters are currently in production. In one section of Ōta, Japan, 554 units are installed with a total generation output of more than 2,100 kilowatts. The technology has been adopted as Japan’s official standard. As a result it has enabled many solar systems to be installed within a certain region and has contributed to the widespread installation of solar generation systems in Japan.