Use Model-Based Design to design, implement, and test control strategies and ECU software for a common-rail diesel engine while working with MathWorks consultants to develop the team’s software development skills and expertise

“Compared with our past experience with hand-coding, Model-Based Design enabled us to reduce labor costs by 30%, cut testing costs by 20%, and increase productivity by more than 30%. We completed ECU development ahead of schedule while establishing our in-house software development team.” 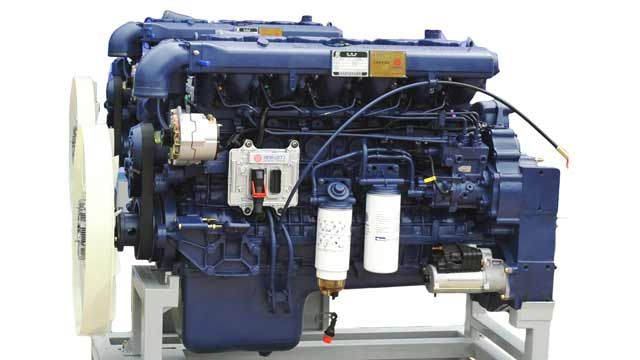 Weichai Power is a global leader in heavy-duty engines. For many years, Weichai purchased engine control units (ECUs) and fuel systems for its diesel engines from suppliers. The company made a strategic plan to develop its own control strategy and ECU software for high-pressure common-rail diesel engines. The reasons for in-house development were to increase Weichai Power’s competitiveness and its ability to innovate by lowering costs, reusing core functionality, and enabling rapid development of engine control strategies based on customer requirements.

While Weichai Power regularly conducts engine control research and prototyping, the company had not previously developed embedded controls and software for a large-scale, production ECU.

Weichai Power sought a methodology and development tools that are widely used in the automotive industry. At the same time, they wanted to reduce the learning curve associated with introducing new tools. They needed to recruit engineers and train them to develop and test ECU software for production before China’s National Emission Standard IV took effect.

Weichai Power adopted Model-Based Design with MATLAB® and Simulink® to design and implement the common-rail diesel engine ECU software. They built a production control and software team, and trained new engineers in the tools. The company also worked with MathWorks Consulting to establish on-target rapid prototyping capability that would enable Weichai group companies and customers to collaborate.

During model development, they used the Model Advisor in Simulink to check compliance with modeling standards adapted from MathWorks Automotive Advisory Board (MAAB) guidelines.

In Simulink, the team created a plant model of the vehicle, after-treatment systems, and engine, including fuel, torque, intake, and exhaust subsystems. To verify the control design, they ran closed-loop simulations of the control and plant models.

After comparing the floating-point and fixed-point model simulation results to verify the conversion, the team generated C code from the control model using Embedded Coder®.

The team generated more than 340,000 effective lines of code for the production ECU with Embedded Coder. The generated code comprised 100% of the application software; 85% of the CAN application layer and diagnostic routines were also generated from models.

Working in MATLAB, the team developed vehicle drive cycle software, which they used for data analysis during testing of the initial production ECUs.