How to use "hold on" for plotmatrix?

Carleen McKenna on 19 Aug 2021
⋮
Commented: Carleen McKenna on 20 Aug 2021
Accepted Answer: Dave B
I am currently trying to run multiple simulations and superimpose all the plots of the sampled probability density functions from the simulation over one another on the same figure via "hold on." For the histogram function this seems to work if I am plotting one variable, but if I am plotting multiple variables to show the marginal and joint distributions I would want to use plotmatrix. However, it looks like plotmatrix and "hold on" are not exactly compatible and don't produce the same result as using "hold on" with histogram.
The format of my code for doing this looks roughly like this (simplified for generality):
n = 1;
while n <= 5
samples = my_function(parameters);
figure(1)
histogram(samples)
hold on
end
What I wanted to do was simply:
plotmatrix(samples)
hold on
Instead of using histogram for when I want to plot more than one variable. But I tried using plotmatrix for just one variable thinking that it would do the same thing as histogram and it doesn't - the plots were not superimposed at all and instead replaced one another.
What would be the proper way to achieve what I want to do?

⋮
The two figures are not at all in the same axis, why should you get them together in one figure?

⋮
Sorry, I must not have been clear. I was trying to make the question more general. To be less general, I'm running a type of monte carlo sampling process, and I'm running it a few times in a row for the same variable. I don't want the marginal and joint distributions all on one plot. I want it so that it has the format of plot matrix, but all the runs are superimposed together, with the resulting joint and marginal distributions on their respective axes.
I gave histogram as an example of what I wanted because if I'm sampling only one variable, I run the sampling process five times, and use "hold on" so that each resulting distribution displays on the same axis. I want this, but in the form of plotmatrix, where each axis in plotmatrix has five different distributions plotted on it from five different runs. 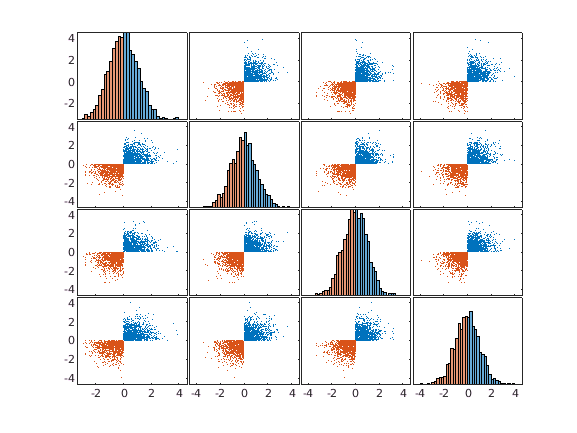