gjashta on 19 Jan 2020
⋮
Commented: dpb on 22 Jan 2020
Accepted Answer: dpb
I have attached the descriptive statistics of 4 different zones below.
Can you help me how to get the four plots in one figure?
I would like something like this https://se.mathworks.com/help/stats/exploratory-data-analysis.html

dpb on 19 Jan 2020
⋮
You haven't kep the underlying data in the summary statistics so can't do the histogram from those statistics alone. It's simple enough to use subplot and the example at <Histogram + PDF Plot>. Presuming you have the Statistics Toolbox, it's much simpler to use normpdf and fplot to generate the theoretical pdf curve than having to write the solution manually, however.
For the general idea, can generate a random sample and use it in lieu of the actual data...
load gjhasta
hAx=gobjects(4,1);
for i=1:4
hAx(i)=subplot(2,2,i);
mn=desc1{1,i+1};
sd=desc1{2,i+1};
histogram(randn(1000,1)*sd+mn,'Normalization','pdf');
hold on
z=mn+linspace(-3,3);
plot(z,normpdf(linspace(-3,3)))
end
results in 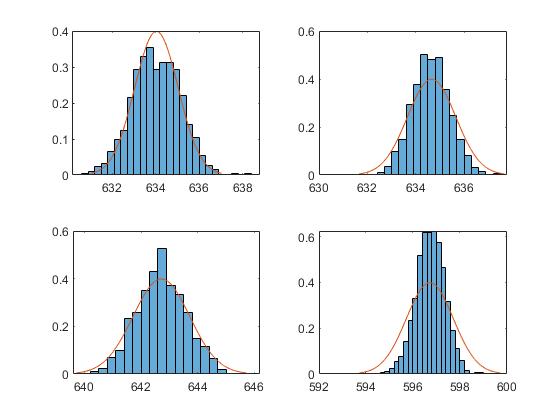 ⋮
Thanks dpb and sorry I just have uploaded the raw data which the descriptive statistics come from. Yeah, I have the Statistics Toolbox. First column in the file rawData belongs to the first column of the file data. As the size of the rawdata are different you will find some NaN numbers.
I hope you can help me to get the same plots as you got above.

⋮
"I hope you can help me to get the same plots as you got above."
Just read your data and use it in place of the random samples for the histogram and joy should ensue.
What have you tried and where did you get stuck?

⋮
Well desc1 was the name of the table in the .mat file you uploaded before.
>> whos desc1
Name Size Bytes Class Attributes
desc1 14x5 3438 table
>>
I don't know what your variable/table name is.
histogram(rawData(:,1)*sd+mn,'Normalization','pdf');
Also, you don't want to scale the raw data in the histogram, randn is a N(0,1) so it had to be to match the statistics.

⋮
What I want is that from the 4 columns in the first file that I have attached to get a figure that contains 4 different plots from each column.

⋮
Well, the file you attached is the one I used for the mean/stdev but there's nothing in it from which to plot an observational histogram so I used those for the sample mean/sd and generated a random sample from the N(mn,sd) distribution to illustrate with.
You haven't provided the raw data from which the statistics were computed so not much else can do here...the attached file is still the same data as before...
>> whos -file rawdata
Name Size Bytes Class Attributes
desc1 - 3438 table
>>

⋮
Sorry, I have explained the file rawData in my previous answer but I forgot to attach the .mat file rawData where the descriptive statistics come from.

⋮
I have used also histogram(rawData(:,i),'Normalization','pdf'); But still I got the error: Brace indexing is not supported for variables of this type.

⋮
"I have used also histogram(rawData(:,i),'Normalization','pdf');"
That looks fine by itself; I had no problem with the barebones
load rawdata
figure, for i=1:4,subplot(2,2,i),histogram(rawData(:,i),'Normalization','pdf');end
at the command line, so you've got something else going on in the code you're actually trying to run.
Without the identical code and the error message in context of the session in which it's run, can't say what nor where your error is...but, it will work if you go through very carefully and make sure you're addressing a table variable with the curlies "{}" to return the underlying data as double and the array of doubles with ordinary parentheses.
I will note these data are all strongly bi-modal; a single normal won't fit the data worth anything. They're also strongly skewed to the right like maybe lognormal or extreme value or similar... 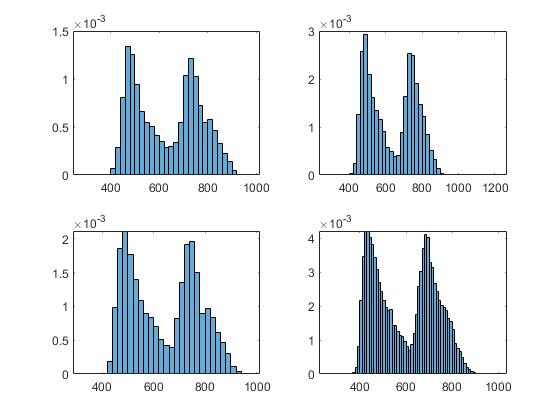 ⋮
How could you possibly do that??? What's to plot? All you have is a set of point statistics and for such a data set, single point measures would appear to be almost meaningless.
What is the end point you're trying to reach? 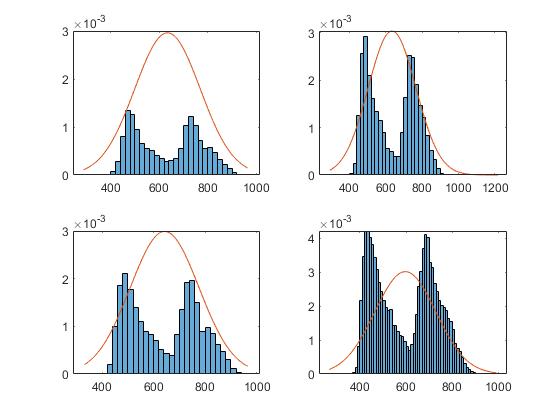 ⋮
You named your script plot which aliased the builtin MATLAB plot() function...which when you then tried to call the latter, is now defined to be a script (that you're executing so if it weren't for the syntax error, you just built an infinite recursive loop) instead of the builtin.
clear plot
then rename your script to something NOT a MATLAB function name and try again...
I'd repeat the Q? I asked above, however...what's the end objective here other than the simplistic one of plotting some data?
The data are bimodal and RH skewed; single-point measures are of virtually no meaning to describe them. What are you trying to accomplish?

⋮
Hi dpb! Sorry for the late reply! My objective here is just to describe and understand the features of this data.

⋮
Well, visualization is obviously the first key...if you had simply looked only at the summary statistics computed, you'd have a totally different idea, probably.
"Describing" can mean a lot of things; what's the end result of this description to serve to do?
Where do the data come from; looks like should be a relatively easy fitting problem for a combination of two unimodal distributions but unless one knows what generated the bimodal result whether that's the appropriate model is yet unknown.