How to apply a fit on this shape?

Niklas Kurz on 15 Jul 2020
⋮
Edited: Niklas Kurz on 19 Jul 2020
Accepted Answer: John D'Errico
Since my data doens't really count as a function cftool is not an option. I wonder whether this is still faisable to fit:
(I tried several elliptical fits but they don't seem to work. May be because I dealt with it a little clumsily) 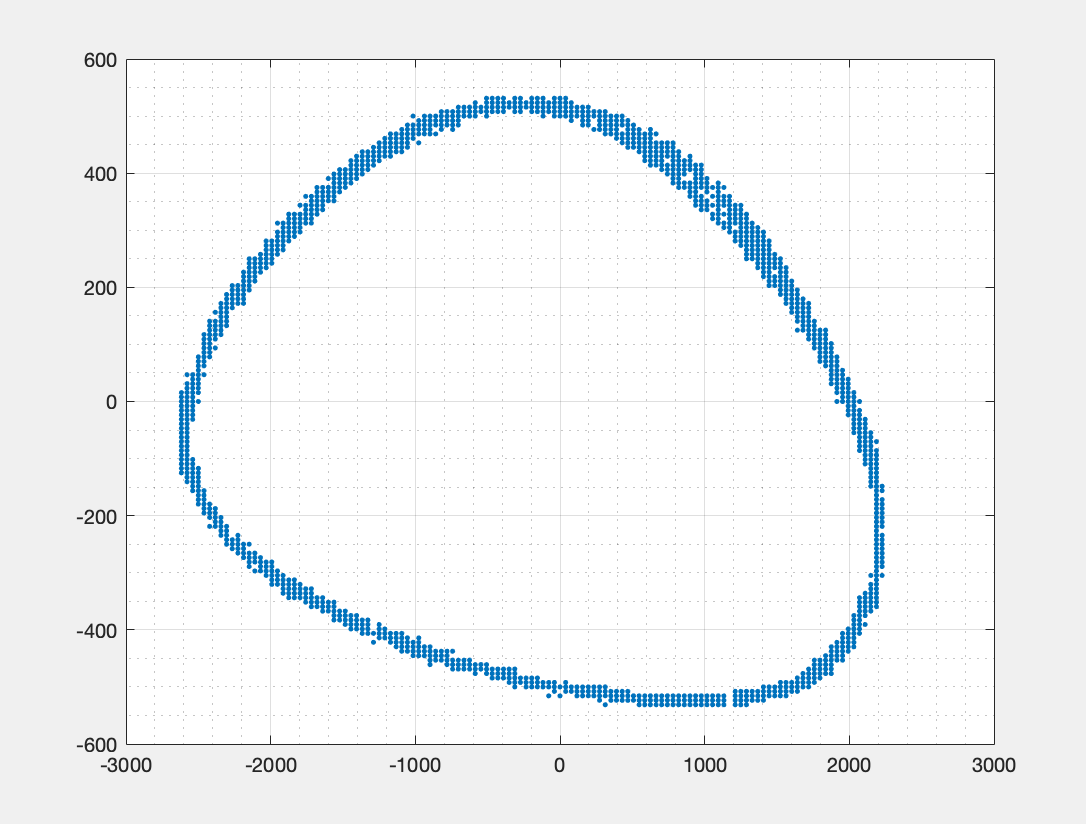 John D'Errico on 15 Jul 2020
⋮
Edited: John D'Errico on 15 Jul 2020
What does it mean to "fit" it to you? What will you do with that fit? The data is not a function, just a set of points, that happen to represent a closed curve in the plane.
A simple solution might be to convert to polar coordinates.
help cart2pol
Now, fit the function r(theta). Be careful, since r is a periodic function. It should have the property that r(0) == r(2*pi). So a polynomial fit would be a bad idea. Instead, perhaps fit this as a sum.
r(theta) = a0 + a1*sin(theta) + b1*cos(theta) + a2*sin(2*theta) + b2*cos(2*theta) + ...
Essentially, I am describing what is essentially a Fourier series there (that is, not an fft, but a Fourier seies.)
https://en.wikipedia.org/wiki/Fourier_series
As it is constructed, the function ALWAYS has the property of being periodic. And, while you could, in theory, trivially use the curve fitting toolbox for this task, there is no reason to do so. All of the parameters can be estimated using one call to backslash.
x = x(:);
y = y(:);
mux = mean(x);
muy = mean(y);
[Theta,R] = cart2pol(x- mux,y-muy);
[Theta,ind] = sort(Theta);
R = R(ind);
plot(Theta,R,'o')
n = numel(x);
M = 6;
A = [ones(n,1),sin(Theta*(1:M)),cos(Theta*(1:M))];
coeffs = A\R;
Rhat = A*coeffs;
hold on
plot(Theta,Rhat)
Larger values of M will yield a better approximation. A perfect circle would have m == 0. Because your curve has an oval shape, you need to have a few extra terms, but not many. M == 6 will require the estimation of 13 coefficients for the series.
I lack your data, so I generated some random crap data as an example, using ginput.
plot(x,y,'o') 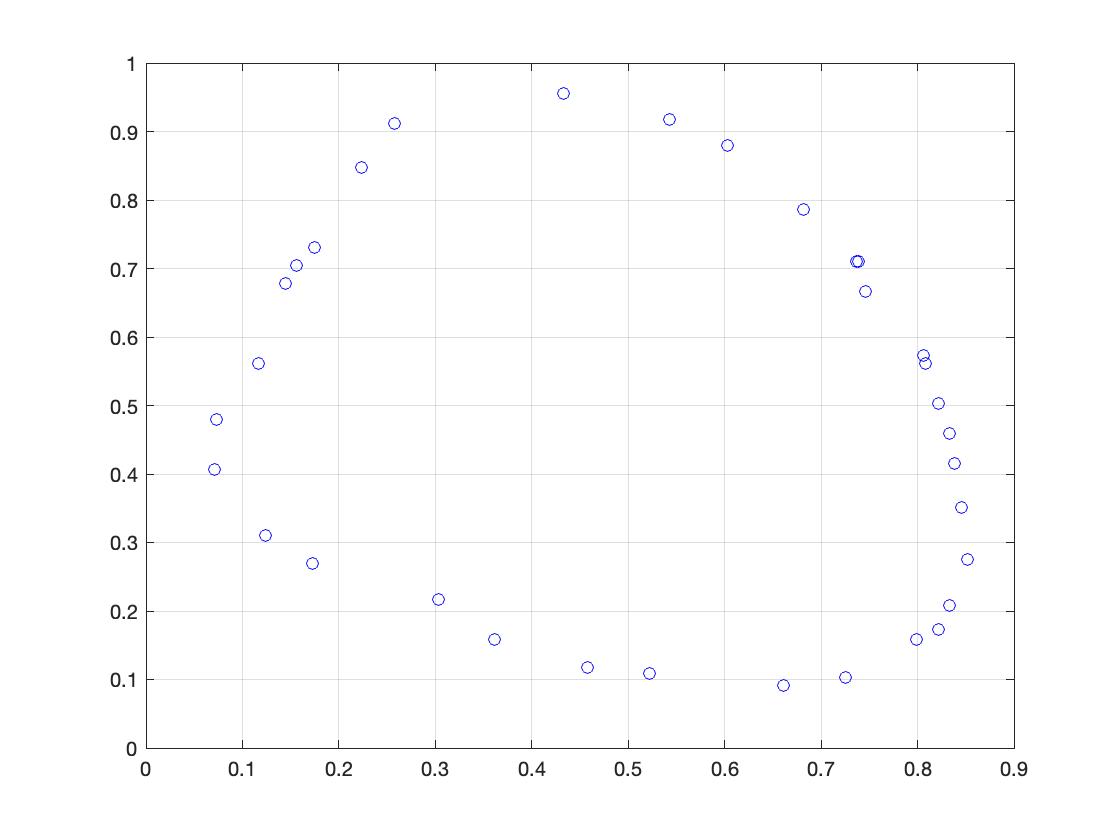 Nothing exciting. Vaguely ovoid. I'm actually surprised it was that good.
R as a function of Theta seems reasonable. 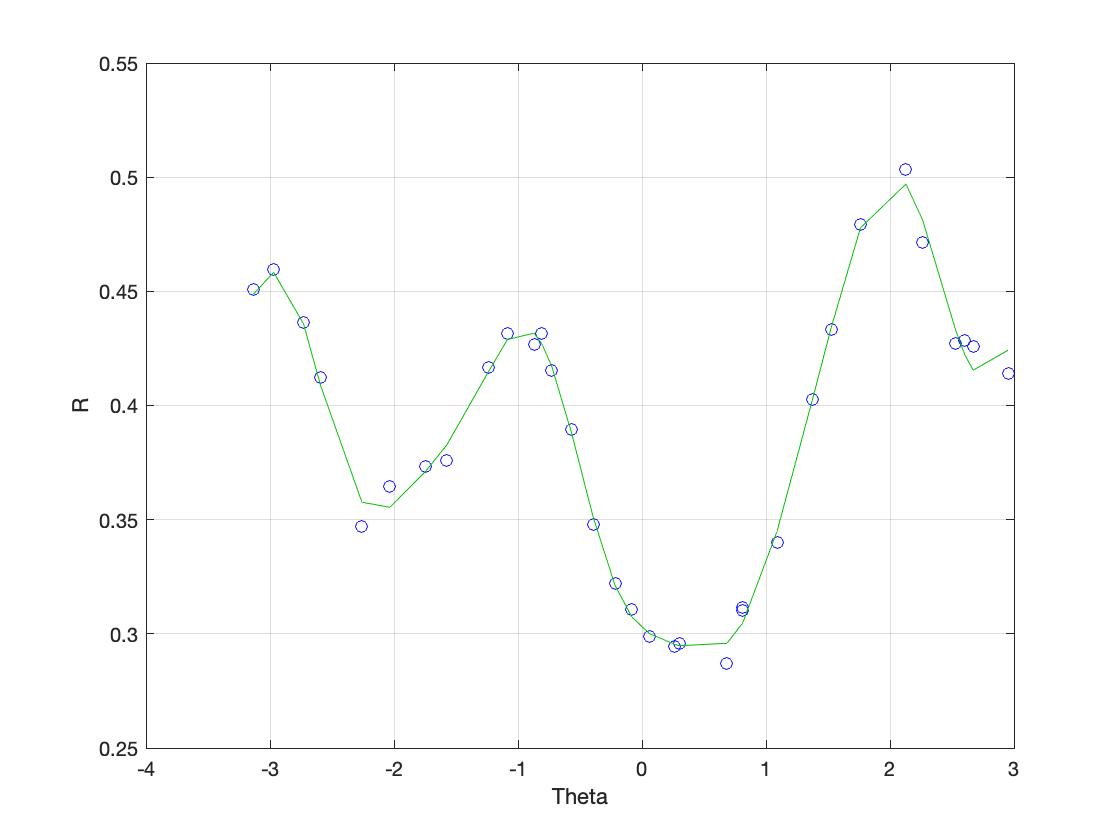 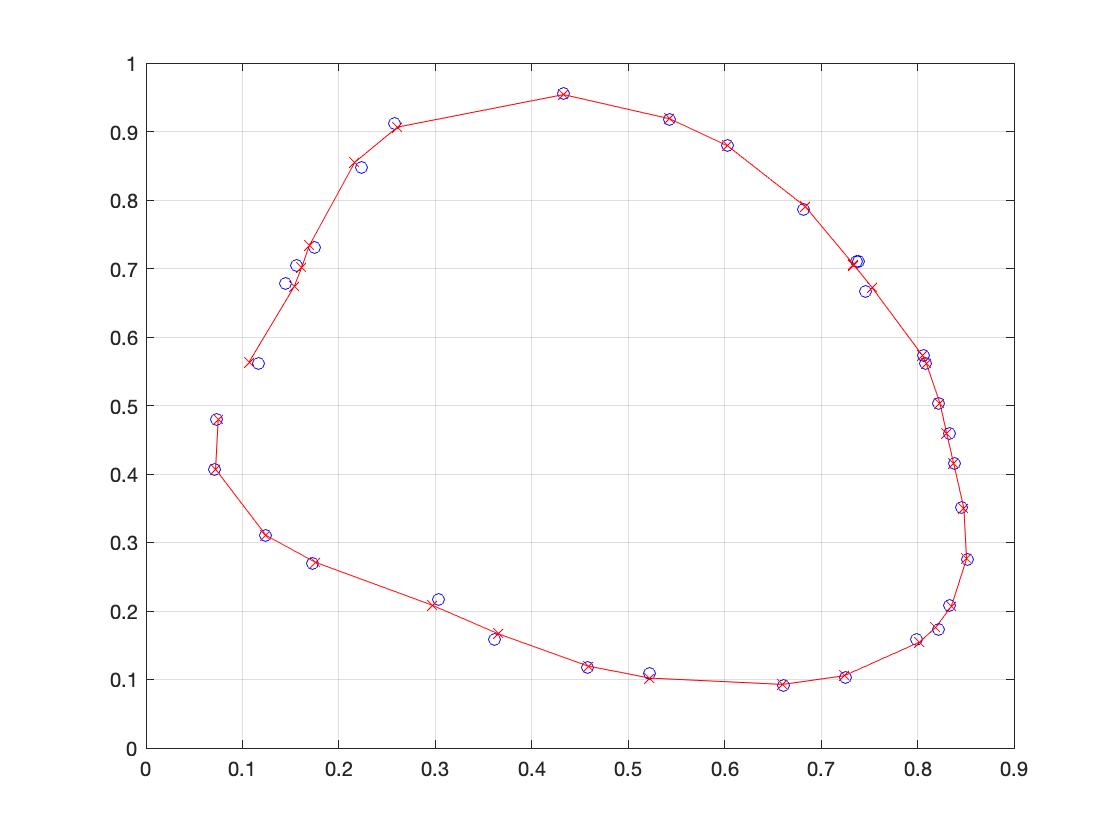 ⋮
Big up, that's some really nice representation. I'm truely astonished. Unfortunaly I lack of deep mathimatical knowledge (At the moment I'm just being in 2nd semester, Fourier Transformation will follow at least in the next one).
However, I attached my data above. I already tried your code receiving a really neat figure. In contrast to other elliptical fits in add-ons.
So to cut a long story short: Actually u answered my question excellently, but I just want to calculate the surface inside this shape. Therefore I thought I'd be smart to draw an ellipse function out of my Data and simply use the parameters for the known area of an elilpse.
But this might be inconvenient now. So how u'd solve it instead posessing such a great toolbox of mathematical skills? 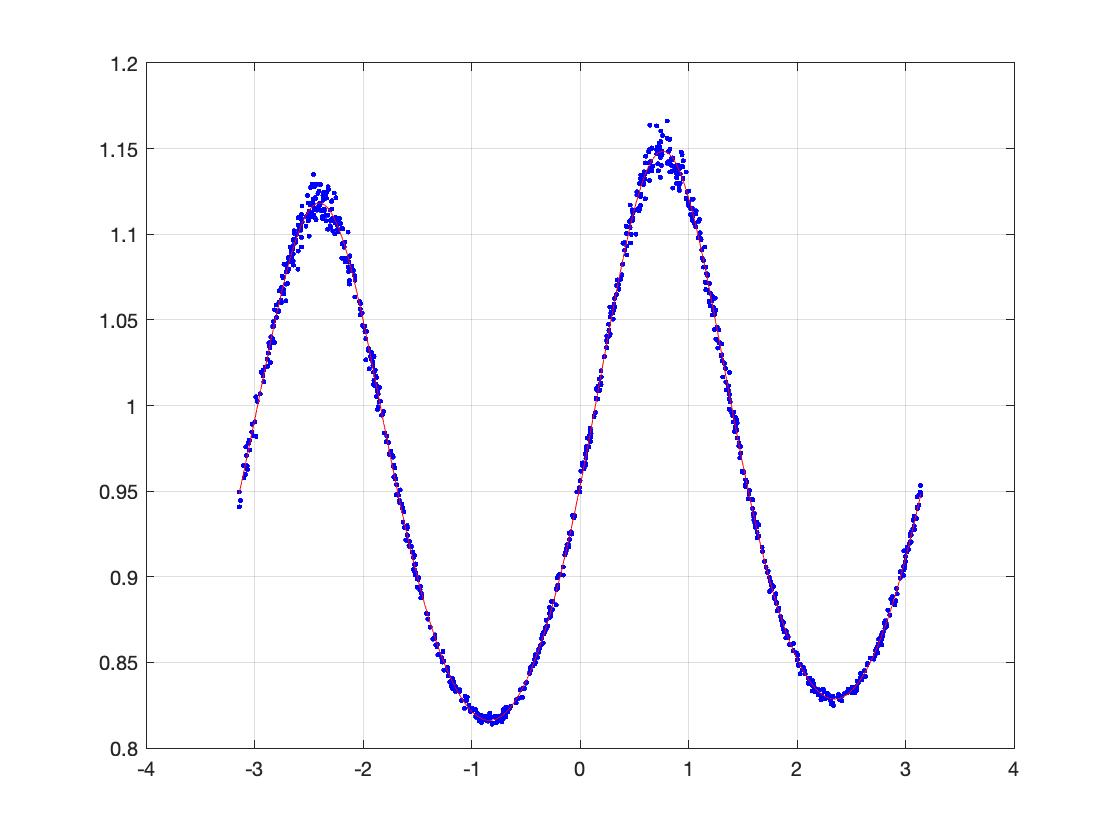 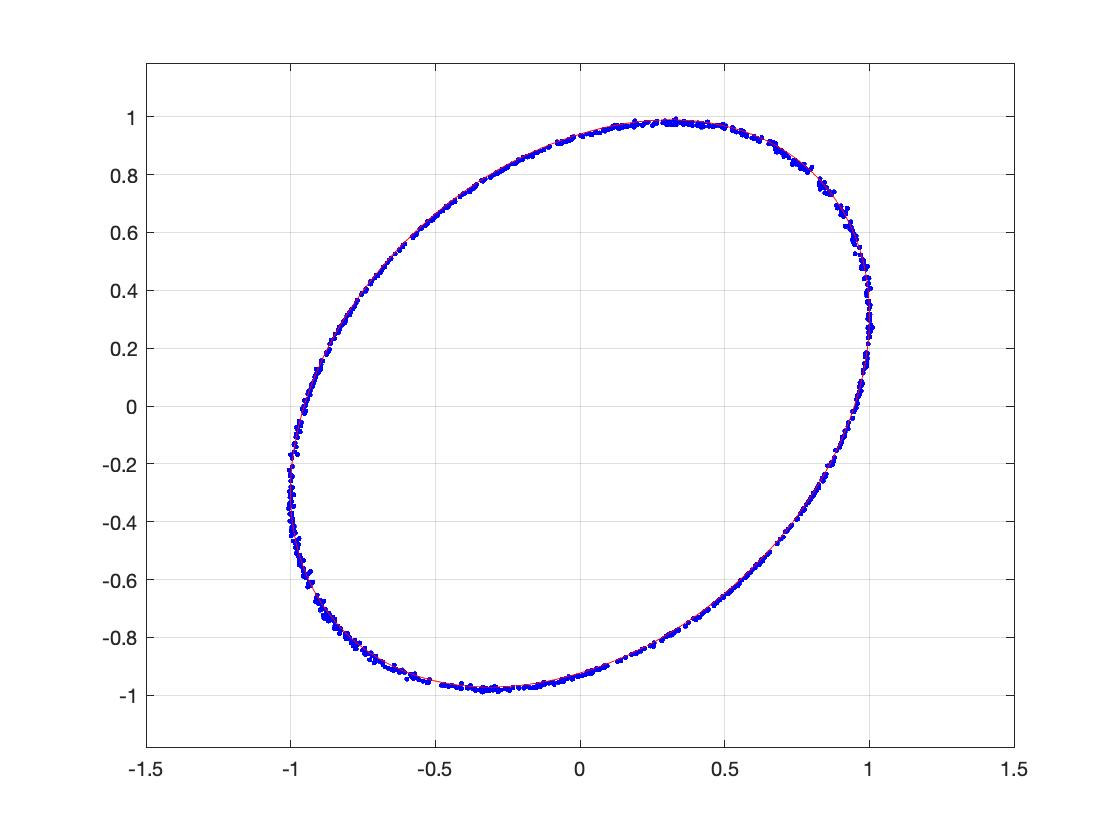 ⋮
Wow, thank you so much for this explanation and your friendly advices, it really helps me deepening my knowledge. :) All the best for you too!

⋮
If I may ask additionally: How to determine the area beneath the curve? Pretending the ellipse would be above the x axis like in the data I attached as well. Since the values are repeating trapz(X,Y) doesn't seem right.

⋮
Why does this question seem to be veering in random directions, with me trying to chase a moving target?
If the goal is to find the area betwen the lower lobe of that closed curve, and the x-axis, there is a problem. You need to find the right and left hand end points to integrate between. A problem is the data is relatively noisy, but also, the noise is not really true noise.
And given this data, the code I wrote needs quite a few terms to perform even reasonably well.
FSfit(x,y,100,1); 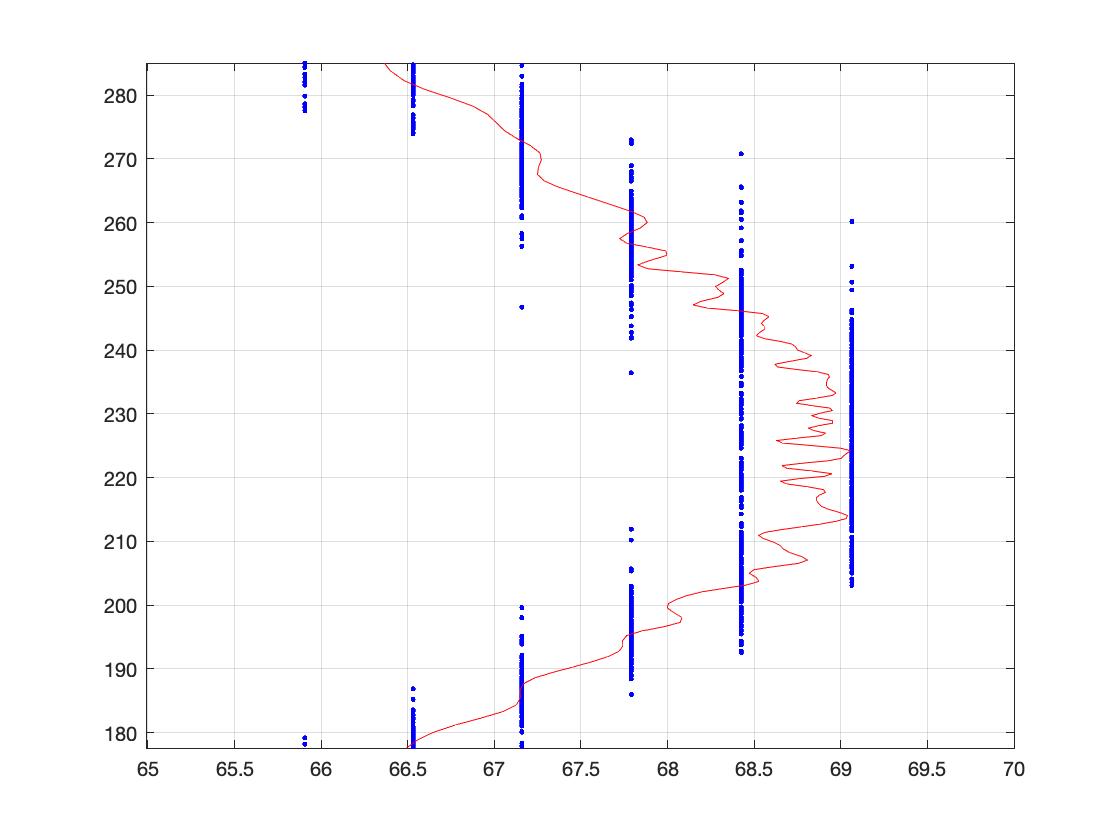 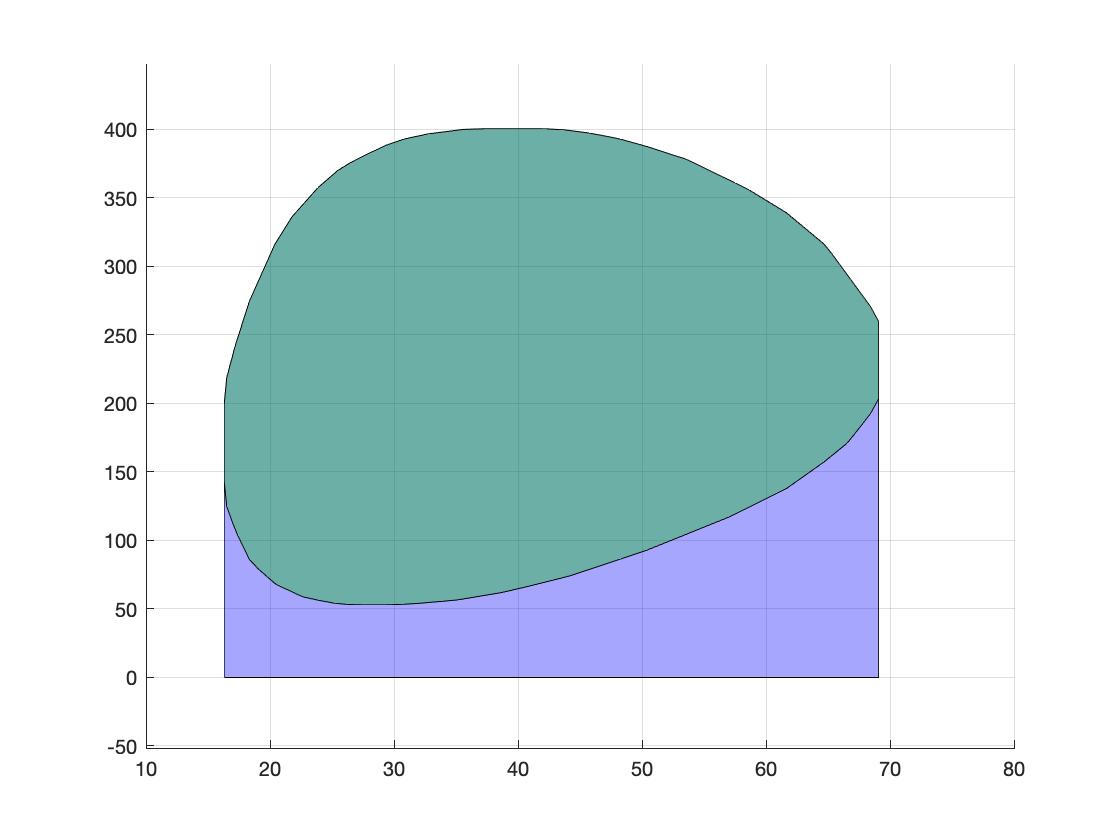 ⋮
Oh.My.Gosh, you're on of the best! I'm like 100000% satisfied now. Excuse me for my randomness, sometimes even I don't know what I'm searching for.