“Using Model-Based Design with MATLAB and Simulink, we achieved multiple goals simultaneously. We developed a sophisticated controller for digital hydraulics that is more reliable, accurate, and efficient than previous systems, and we accelerated development, which gives us a competitive advantage.” 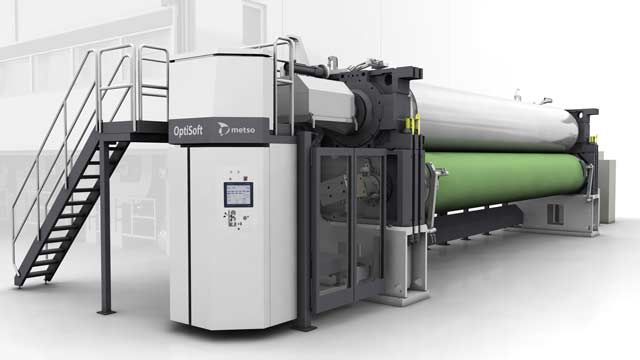 Metso papermaking equipment. The machine’s calender is controlled by a digital hydraulic system.

In industrial papermaking equipment, the calender rolls must be precisely controlled to achieve the right degree of smoothness and glossiness in the paper. Typically, roll positions must be maintained within a tolerance of 0.1 millimeters, and the pressure at the nip—the line of contact between rolls—must be within 0.2 bar of its set value.

“Model-Based Design with MATLAB and Simulink was instrumental in helping us reduce costs and improve quality because it enabled us to test and tune a complex controller design via simulation, rapidly implement a real-time prototyping system, and generate code for a production industrial controller PLC,” says Kari Leminen, general manager of automation technology at Metso.

Metso wanted to streamline the development, testing, and production of controls for its first digital hydraulic system for advanced papermaking machinery.

While digital hydraulic systems require less energy and floor space than proportional hydraulic systems, they require much more complex controls. A digitally operated hydraulic cylinder can have 30 to 40 valves, and a single machine 20 or more cylinders, creating significant control requirements.

“With a proportional hydraulic system, it’s easy to set up a PID controller to adjust the valve position as needed,” says Ville Hopponen, technology engineer for automation at Metso. “A digital hydraulic system requires much more complicated mathematics in the controller, and programming mistakes are common when you are developing such a complex system.”

Metso needed an efficient way to produce a real-time prototyping system, a customer pilot implementation, and a production version of the digital hydraulics controller.

The initial control design was developed in cooperation with Tampere University of Technology’s Department of Intelligent Hydraulics and Automation.

University researchers modeled the control system and the digital valves in Simulink®. They modeled the calender frame and other aspects of the plant with Simscape Multibody™, and conducted closed-loop simulations in Simulink to verify the feasibility of the design.

Metso engineers enhanced the researchers’ initial model, adapting it for commercial use and adding fault tolerance, diagnostics, and status reporting features. After verifying the enhanced design in Simulink, Metso engineers used Simulink Coder™ to generate C code from their model, which they deployed to dSPACE® Simulator® hardware for real-time testing.

Test results were analyzed in MATLAB® and used to guide design refinements.

To produce the first customer pilot version, Metso switched from dSPACE to Simulink Real-Time™. During the process, the core Simulink model was unchanged; only input and output modules were updated to accommodate real-time communication with actual hardware.