“MATLAB and Simulink provided a single platform that supported our complete workflow and all the components and protocols we needed for our robotic system. That enabled us to quickly develop a safe, real-time device, ready for clinical investigation.” 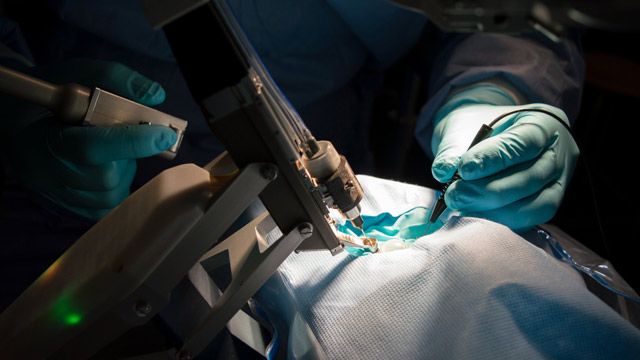 The PRECEYES Surgical System. The system manipulates the instrument that enters the eye and is controlled using the motion controller on the left; the surgeon operates with the other hand manually. Image copyright and courtesy Preceyes.

Vitreoretinal surgeries, which are performed inside the eye, require a degree of precision and stability that is extremely difficult for the human hand to sustain. A big increase in vitreoretinal diseases, strongly correlated to the aging population, demands the development of new treatments that require even higher levels of precision. A potential new treatment for retinal vein occlusions, for example, would involve inserting a needle into a vein as thin as a human hair and holding it still for about 10 minutes—a task that would be virtually impossible for even the most skilled surgeons.

Surgeons at the John Radcliffe Hospital in Oxford, England, performed the world’s first robot-assisted vitreoretinal surgery in 2016. They used the PRECEYES Surgical System, a robotic assistant that scales the surgeon’s movements and filters hand tremors to enable unprecedented steadiness and precision.

More recently, Preceyes started clinical trials at Rotterdam Eye Hospital. They successfully integrated their newly developed distance sensor in the robot and validated the robot-sensor combination. The sensor measures the distance of an instrument from the retina inside the eye. Providing sensor-based safety and guidance, this approach promises to provide significant safety and performance benefits during demanding retinal surgery. Moreover, it will be a valuable source of data for training and evaluation. Engineers at Preceyes designed and implemented the robot’s control system using Model-Based Design with MATLAB®, Simulink®, and Simulink Real-Time™.

“As a lean startup, it was important for us to achieve a first release quickly without compromising safety, in order to obtain clinical feedback and to build evidence, before designing a final product,” says Maarten Beelen, cofounder and integration manager at Preceyes. “Simulink and Simulink Real-Time enabled us to rapidly design our controller, verify it, implement it on a real-time system, and test it with users. A traditional software development workflow would probably have extended our timeline considerably.”

Preceyes set ambitious objectives for its surgical system. Not only would the enhanced precision make new procedures possible, it would also improve existing procedures, such as the peeling of membranes from the retina and the replacement of the eye’s fluid. In working toward these objectives, the Preceyes team had two priorities: to ensure patient safety and to produce a working clinical investigation device as efficiently as possible.

To achieve their design objectives within the development schedule and safety constraints, Preceyes engineers needed to take advantage of modeling and simulation technology that had been used in other safety-critical applications across multiple industries. Specifically, they needed to model complex control logic and then perform functional verification of their design, first via simulation and then via real-time tests on the actual robot. In addition to real-time control software, the team needed to develop a non-real-time application with an interface running on a PC that physicians could use to configure settings before and during surgical procedures.

Preceyes used Model-Based Design with MATLAB, Simulink, and Simulink Real-Time to accelerate the development of a real-time control system for its PRECEYES Surgical System.

While constructing a basic model of the robot’s kinematics and dynamics, Preceyes engineers conducted system identification tests in which they used Simulink Real-Time to produce excitation signals for the robot’s 11 electromotors and then measured the responses across each of its 11 degrees of freedom.

After analyzing and fitting the measurement data in MATLAB, they used the results to develop a Simulink plant model that described how the robot moved in response to applied forces.

The team developed a controller model that processes input from the system’s joystick and approximately 60 sensors—including optical and magnetic encoders—and generates the necessary motor signals to move the tool tip in response to the surgeon’s movements. Within this model, they incorporated EtherCAT blocks from Simulink Real-Time to interface with nodes on the robot’s EtherCAT network.

Using Stateflow®, the team modeled sequential logic for the system’s various operating modes, which include calibration, initialization, and self-verification.

After verifying the basic operation of the controller and control logic through simulation, the engineers generated code from their model using Simulink Coder™ and deployed the compiled code to a real-time target computer running Simulink Real-Time. This computer was connected to the robot’s sensors and motors via the EtherCAT network.

To refine and enhance the controller, the team made improvements to the model, checked them via simulation, and then tested them on the actual robot using the Simulink Real-Time setup.

The engineers used GUIDE, a MATLAB UI development tool, to develop the touch-screen application software that surgeons use to change surgical settings and receive visual and acoustic feedback during surgery.

The safety and efficacy of the PRECEYES Surgical System has been demonstrated in 14 surgical procedures. Additional demonstrations are planned at top surgical sites, including a two-year collaboration with Rotterdam Eye Hospital. The company is also working on CE registration and the next generation for volume production. 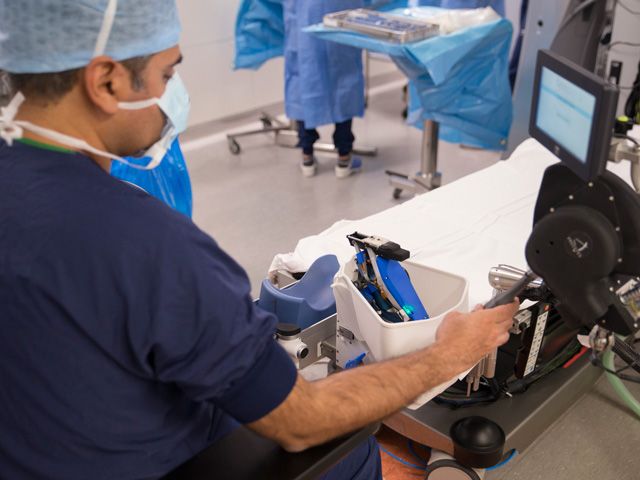 The PRECEYES Surgical System, prior to surgery, at Rotterdam Eye Hospital. Image copyright and courtesy Preceyes.