"MATLAB not only shortens analysis and algorithm development time, but it allows me to experiment with new methods that otherwise would be too time-consuming." 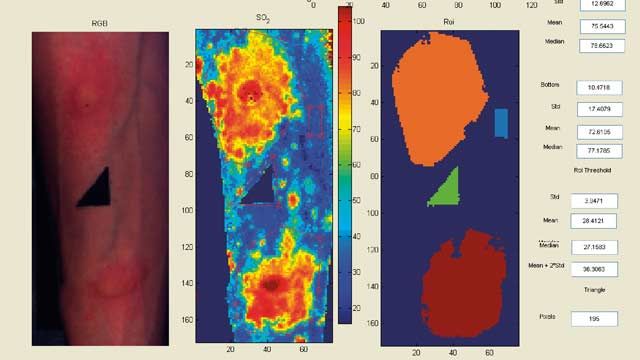 In most hospitals today, oxygen saturation is measured with a pulse oximeter, a device clipped onto a fingertip that transmits light through the finger’s blood vessels. This approach, however, is not accurate enough for advanced medical applications and cannot be used in areas such as the chest or arm.

Hyperspectral imaging holds great promise in improving the accuracy of oxygen saturation measurements while allowing them to be taken at any point in the body. Clinicians, however, lack the tools to convert image data into oxygen saturation maps.

"We wanted to shine a light on the surface and measure the oxygen content of the tissue from the information that was reflected back," says Paul Rodmell, senior research fellow at the University of Nottingham. "This is quite difficult because tissue scatters light."

To address this challenge, Rodmell needed an analytical environment for image processing and algorithm development.

To create a normalized reflection map of the image, Rodmell obtained a hyperspectral image of a purely white surface, and used MATLAB to perform three-dimensional matrix division on the two sets of data.

He then used MATLAB to develop patent-pending algorithms for computing oxygen saturation maps from the raw reflectance data.

After Rodmell had developed a reliable method for producing oxygen saturation maps from hyperspectral images, he used MATLAB to develop tools that enable clinical researchers to easily apply the technology. Using MATLAB development tools and Image Processing Toolbox, Rodmell created a tool that enables research biologists to select a region in an image and obtain metrics of oxygen saturation for the region.

The University of Nottingham used Image Processing Toolbox to enable users to graphically select a region of interest and automatically identify pixels within that region that were above a specific threshold.

"After AstraZeneca began using the tool, they asked me to add a histogram. I quickly added one to the tool and sent it back in about an hour," Rodmell explains.

AstraZeneca researchers use the tool to evaluate the effectiveness of anti-inflammatory drugs by measuring oxygen saturation in the arms of volunteers who had an allergic response to grass pollen or house dust mite.

The University of Nottingham continues to accelerate and automate the image analysis process using MathWorks tools.

"The University of Nottingham is now integrating image acquisition with image analysis using MATLAB," says Hargreaves. "This will allow our clinicians to do on-the-fly analysis and see the oxygen saturation maps as they are captured rather than waiting for post-acquisition processing."

University of Nottingham is among the 1300 universities worldwide that provide campus-wide access to MATLAB and Simulink. With the Campus-Wide License, researchers, faculty, and students have access to a common configuration of products, at the latest release level, for use anywhere—in the classroom, at home, in the lab or in the field.

Learn more about University of Nottingham