“Simulink enabled us to produce a stable control system in a short time. We modeled the entire system, including a state machine and cascaded PI controls. We refined this model to improve robustness and response times, then verified it with RCP, and generated embedded code.” 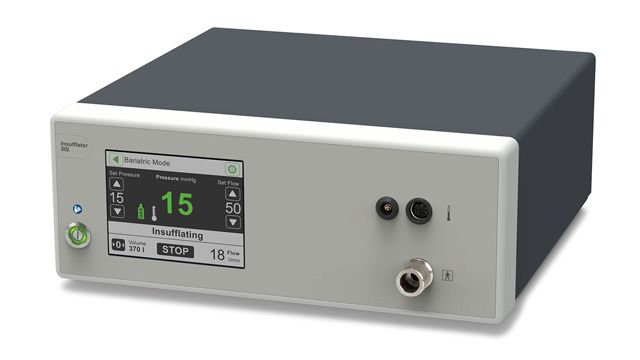 A 50L insufflator from WOM.

Laparoscopy and other minimally invasive procedures must be performed within tightly confined spaces in the abdomen. To increase freedom of movement for surgical instruments, insufflators are used to expand the body cavity by blowing CO2 gas into it. Insufflators are categorized as Class II medical devices, which means that their control software must be exceptionally reliable and developed in compliance with IEC 62304, the international standard for medical device software.

WOM, one of the world market leaders in insufflator and pump technologies for laparoscopy and hysteroscopy, uses Model-Based Design with MATLAB® and Simulink® to accelerate the development of high-quality insufflator control software.

To maintain the stability of the abdomen during an operation, an insufflator requires exceptionally precise control of pressure and gas flow.

On similar projects in the past, WOM engineers used a traditional development workflow that involved hand-writing code. This approach made it difficult to identify and correct design and coding errors until late in the process, delaying software delivery.

WOM wanted to reduce the time required for new hires to become productive. They also wanted to shorten development time while improving quality and satisfying the certification requirements of the FDA and German regulatory authorities.

WOM used Model-Based Design with MATLAB and Simulink to accelerate the delivery of certified medical insufflators and pumps.

Working with System Identification Toolbox™, WOM engineers used measured input-output data to create a nonlinear mathematical model of the abdominal cavity. They incorporated this model into a plant model in Simulink that included pressure sensors, actuators, and other hardware components.

Next, they developed a control model with two cascaded proportional integral (PI) controllers, one for flow and one for pressure. They used Simulink Check™ to check that the control model complied with industry-standard control algorithm modeling guidelines and IEC 62304 guidelines.

Using Stateflow®, the team modeled decision logic and state transitions for the system—for example, the transition from the initial inflation mode to a mode that maintains pressure in the abdomen within set upper and lower bounds.

The team verified control functionality by running closed-loop simulations of the control model with the plant model.

To verify the real-time performance of the design, they generated C code from their control model with Simulink Coder™ and deployed it to real-time hardware connected to sensors and actuators in a prototype insufflator.

WOM engineers shared this rapid control prototyping (RCP) setup with their customer to demonstrate the stability of the controller and to solicit feedback on functional requirements and performance.

After refining the design based on customer input, the team generated production code for the target Arm® Cortex-M® processor. They used the Embedded Coder Support Package for Arm Cortex-M to optimize execution speed for basic math operations such as square-root via the Cortex Microcontroller Software Interface Standard (CMSIS).

Following comprehensive integration tests and system-level tests, WOM received approval from the FDA and German regulatory authorities for the new insufflator, which is now in production and in clinical use.