What does my Root Locus response mean? Why is it different?

Joel Okanta on 31 Mar 2022
⋮
Edited: Paul on 1 Apr 2022
Right at the moment I am learning about Root Locus of the system and how they are normally used for damping/oscillating systems. I often see Magnetic Levitation Papers use these to determine the root locus, which I guess must be to determine the oscillations in their system. However, unlike their ones, mine is a bit different, only sitting at the real axis. Is this alright? I mean it does make sense since both my roots exist on the real plane, but I'm curious and want to know more as I cannot find any relevant info about MagLevs and root locuses anywhere else.
My system:
sys = tf([-19008],[960.704 0 -2376000])
rlocus(sys)
Results: 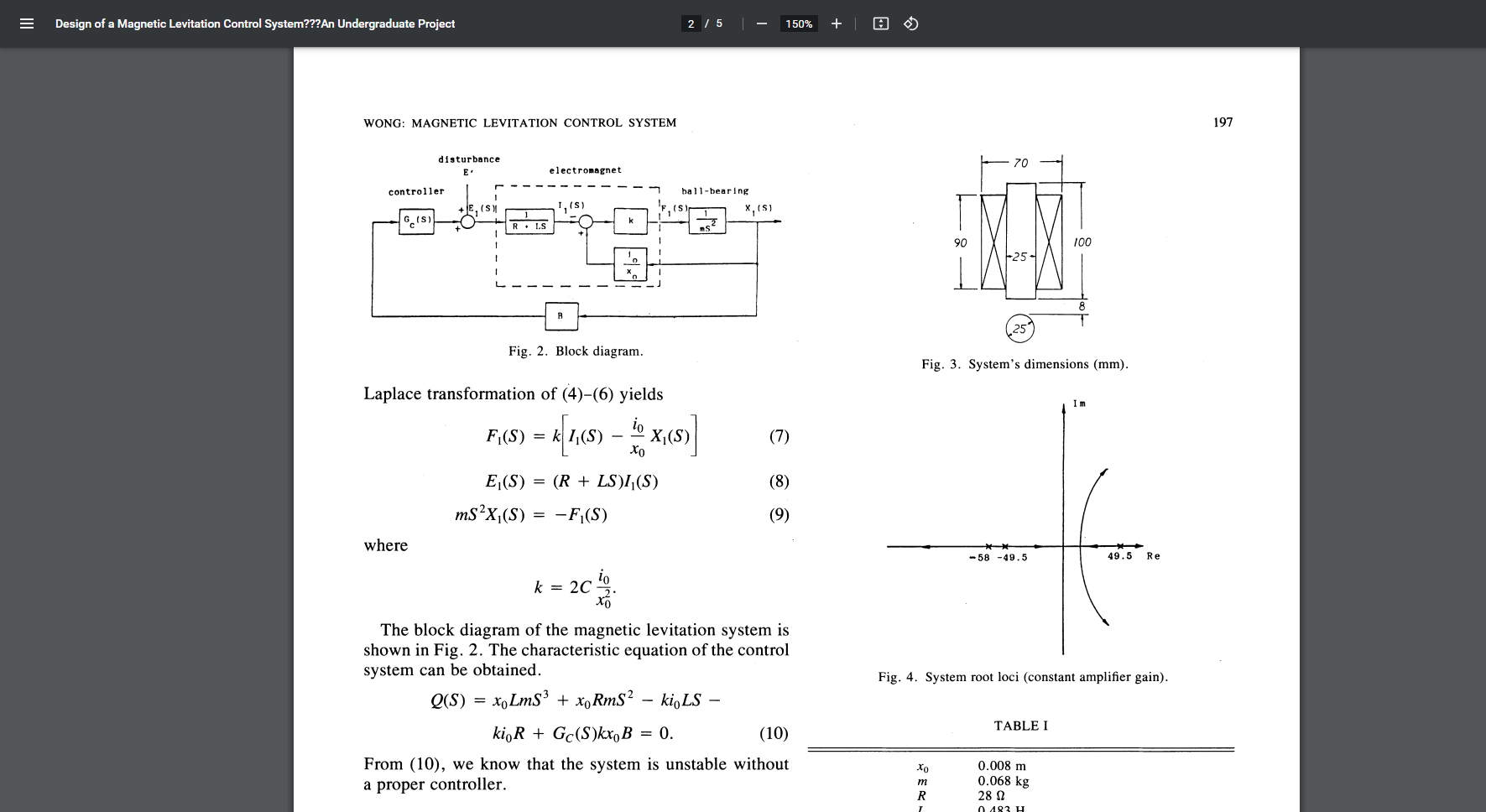 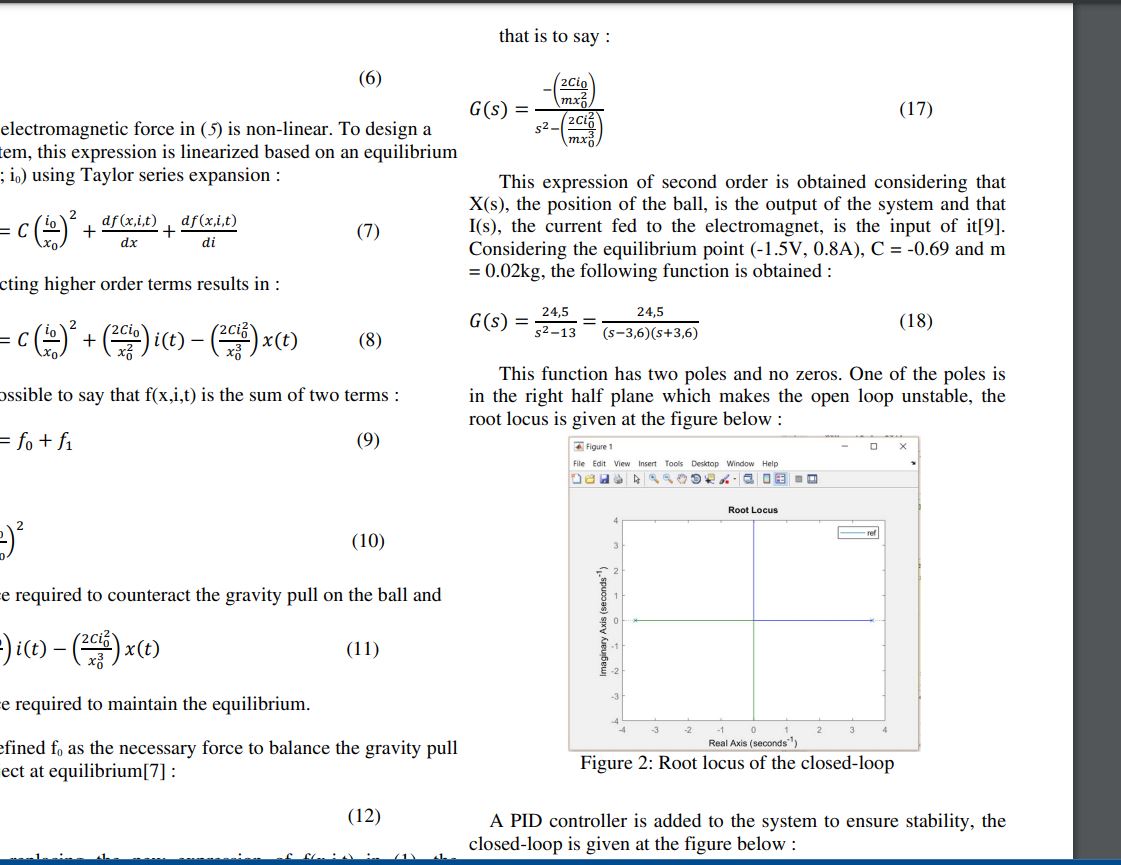 Paul on 31 Mar 2022
⋮
Hello @Joel Okanta
The root locus is much more general than as suggested in the Question. Given a system described by an open loop transfer fuction L(s), the root locus are all values of s that solve, i.e., are the roots of, the equation
D(s) = 1 + K*L(s) = 0
as the scalar K varies over the range -inf < K < inf. Often the root locus is plotted only for 0 < K < inf ( the default for rlocus() ), but don't forget that sometimes we need to consider K < 0.
That equation is critical becase the roots of D(s) are the closed loop poles of a system with open loop transfer function K*L(s), and the closed loop poles determine the modes of the system. So the root locus technique applies to much more than just dampled oscillator systems, as the example in the Question illustrates with the closed loop poles one the real axis.

⋮
Hi Paul, thanks for your response. So after making that comment of root locus being more general I dug a little deeper and found some more information regarding it. In my case, I'm basically using this function to check if I need Closed Loop control for the system I am using, and prove why the root locus shows the instability of my system.
I did see some explanations online which mentioned that instability begins after the roots, whilst stability remains at the roots, but it feels like I am still missing more information 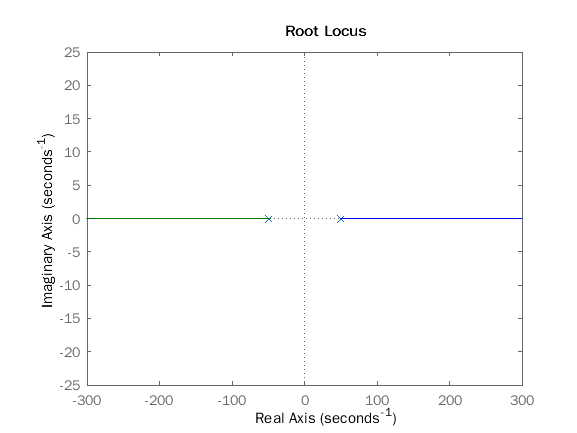 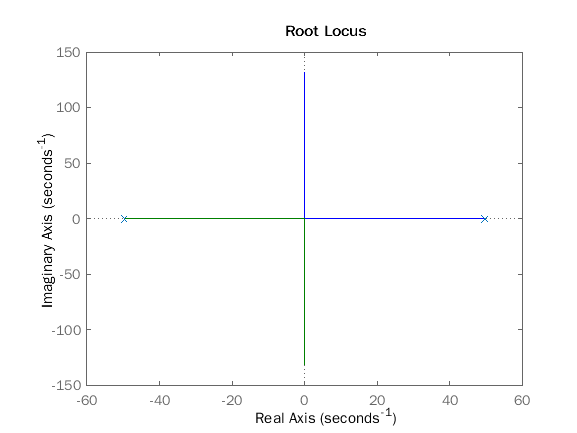 This plot tells us that for low, negative K there will be one unstable real closed-loop pole and one stable real closed loop pole. As a critical value of the gain, we have two closed loop poles at the origin and as the gain becomes more negative we have a conjugate pair on the imaginary axis (beause the poles of P are mirror images). Between these two plots (which could have been combined into a single plot) we know that that proportional feedback cannot stabilize the system. Some sort of dynamic compensation is necessary of the form K(s) = k*G(s).
For example, let G(s) = (s + 20)/(s + 80)
G = tf([1 20],[1 80]);
Then we plot the root locus of G*P for k < 0
figure
rlocus(G*P,-1000:0); 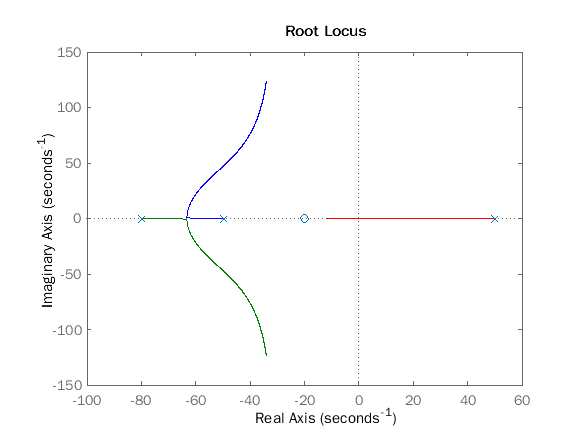 The plot shows that for k < kcrit (which is the gain where the red branch crosses the imaginary axis and happens to be ~ -500), the closed loop system with compensation of the form U(s) = (R(s) - Y(s))*K(s), with K(s) = k*G(s), will be stable because all of the branches of the root locus are in the left half plane. Whether or not a particular value of k yields desirable closed loop pole locations is another question.