How to access a struct through a field name.

Allan Munro on 26 Nov 2020
⋮
Commented: Image Analyst on 30 Nov 2020
Accepted Answer: Image Analyst
I am having difficulty figuring out how to accessa struct by field name. I have only been able to access it by row number. Can someone help me figure this out?
I am creating a struct with the feilds for differnt stocks. How do I write a command to access a field by matching the stock name?
For example:
ProfitCheck = PortfolioCheck(1).marketPrice > PortfolioCheck(1).averageCost;
I can get it to work with row numbers, but instead I want it to look for a stock name?
I have a list of stocks, 'symbols', and want to have the function look through the struct for a matching field name 'PortfolioCheck.symbol = AAPL then return the 'marketPrice' and 'avererageCost' 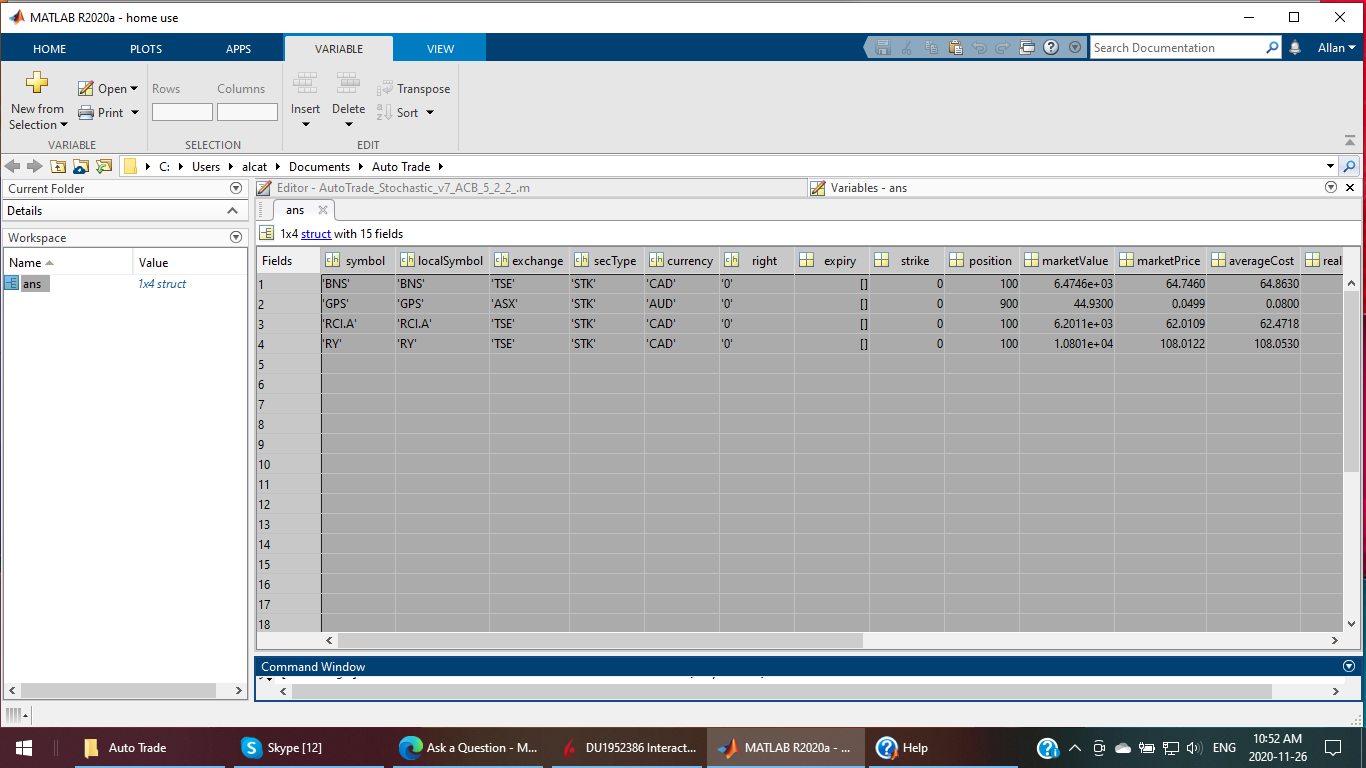 ⋮
Thanks! I'm new to matlab so it is a lot to digest.

⋮
But you're a smart guy so I'm assuming you got my answer below to work. If not, attach your variable in a .mat file with the paper clip icon.

Image Analyst on 26 Nov 2020
⋮
It shouldn't be a problem with what you've shown since every structure in the structure array has a unique value for the symbol field. If you have a situation where the same symbol could appear in multiple strcutures in the array, I suggest you look into ismember() to pull out only those structures in the array where the symbol field has the symbol you're looking to extract. Something like
[ia, ib] = ismember({PortfolioCheck.symbol}, 'BNS');
If that doesn't work, try getting rid of the braces or swapping the order of the input arguments until you get the one that works.

⋮
Hi Image Analyst,
Maybe I am not getting this right in my head...
I have a list of stocks in another list and I want them to be checked against this data. I have the field 'StockSymbol' and these stocks:
StockSymbol
BNS
RY
AAPL
is there a way to check the array 'PortfolioCheck', and the field 'Symbol" to check the array for each symbol i have in the stock list?
Check each 'StockSymbol' on the construct PortfolioCheck.symbol and return the fields 'averageCost' and 'marketPrice' for each.
What would be the syntax to do that? I'm getting stuck in a loop here.
thanks
Allan

⋮
Make it easy for us to help you. Can you attach PortfolioCheck in a .mat file:
save('answers.mat', 'PortfolioCheck');
then use the paper clip icon to attach it.