Error when trying to plot with a datetime array

⋮
Your code would be easier to read if you got rid of the table2array calls and switched to {} indexing
table2array(T(:, 2))
becomes
T{:, 2}

⋮
Not to mention formatting the code in the window -- I did for OP this time..
And. per usual, without the actual data to see what is actually contained in the file and how MATLAB interpreted it, we're shooting in the dark...
Also, though, if the above
dateFJ2=datetime(dateFJ2, 'Format','yyyy/MM/dd');
line works without error, then probably what is happening is you have already plotted onto an axes with an "ordinary" variable as the x-axis variable and that has created a NumericRuler axis -- and you can't plot a datetime on an existing numeric axes; at least directly.
>> plot(rand(10,1))
>> hold on
>> plot(tmp.DateTime,tmp.x_p_)
Data inputs must match the axis configuration. A numeric axis must have numeric data inputs or data inputs which can be converted to double.
>>
Isn't quite the identical message; that may depend on the release being used or precise sequence used. Above tried to put a datetime on a numericRuler axes -- it did have hold on to force the attempt on the same axis that isn't explicitly in you code, but perhaps there's more going on than you've yet posted...
Is why it's so much more helpful to have actual test cases that can run to try to duplicate the error...otherwise, it's having to make up stuff and hope to match the conditions. Sometimes that's easy enough; other times "not so much!".

⋮
Hello! Thanks for the help, sorry I am new to using the MATLAB answers so I keep forgetting to add in my file that I am working with. Its attached now.

⋮
I tried plotting each variable individually against an array of randomly generated numbers. The dateFJ2 array worked butwhen I did it with the flowFJ2 it showed me the same error

⋮
Again, without data to test with or better yet, an actual demo case that can run, we're just guessing what's really going on...

⋮
I linked my data in the comment above. Here it is again in case my other comment didnt load. Thanks 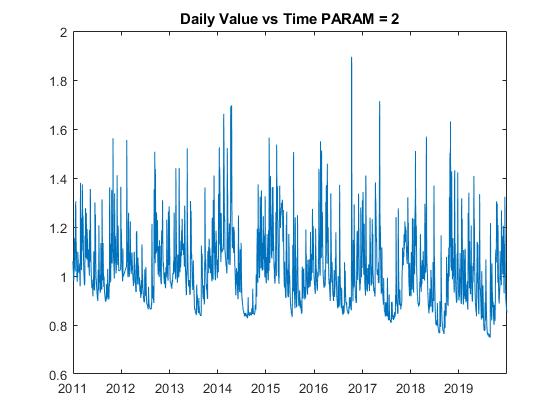 ⋮
I did still have the second one and it managed to do it, eventually...

⋮
Thank you! I got it to work as well. I understand your code for the most part but I was wondering if you could explain the part of the code that says:
ix=(g==i);
and how that works within this part:
plot(tDaily.Date(ix),tDaily.Value(ix))
Sorry if this is basic knowledge I am new to MATLAB and learning as I go.

⋮
"Logical addressing"
g is the group number returned from findgroups and so is a vector of 1:nGroups (2 in this case although I wrote the code to be generic instead of hardcoding in the '2', always an objective to not hide "magic numbers" inside code that have to be changed manually when the problem/dataset changes just a little).
So, then the ix array is also a vector, but is either True|False (1|0 but a logical variable, not a number is key here) where the True is where the group number matches the index, False elsewhere.
MATLAB, being vectorized, knows all about vector array indices, be they numeric or logic; if they're numeric they refer to the actual element position in the variable; if they're logical, they return the position in the array for those elements which are True and ignore the False.
It's discussed in the documentation on a section on addressing -- and while it is basic, it is one of most powerful fo the features in using MATLAB effectively.

⋮
Okay that makes sense thank you very much