⋮
@Roble Noor, what units do you intend for h? This is another example where comments in your code are a good idea. Since G and initial_angular_velocity are specified with time units of seconds, h should also be in seconds. This means your simulation runs for 12 seconds. Did you mean 12 months? For 12 seconds, Earth's path is not discernably different from a straight line.
You define
function vel = P(Gravity,Mass,radius,ang_velocity)
but when you call the function, you call it by
dvdt=P(G,M,distance(i-1),angular_velocity(i-1));
which makes me wonder if P() is supposed to calculate velocity or acceleration. Right now it calculates neither, since the right hand side terms have inconsistent units.
Your code has equations
x(i)=distance(i)*sin(angle(i));
y(i)=distance(i)*cos(angle(i));
which shows that distance equals distance from the origin (where the sun is). In the formulas above, you reverse the usual convention: x=r*cos(a), y=r*sin(a) is standard, but you have them reversed. That would not be a big problem if your convention were applied consistently throughout.
Your code also has the equations
speed(i)=speed(i-1)+dvdt*h;
distance(i)=distance(i-1)+speed(i)*h;
These are OK for one dimensional motion, but not for motion in two dimensions, which you are simulating. In uniform circular motion, speed is constant, but distance from center does not change. Your formula does not allow this to happen.
Overall, it seems like your equations are a mixed and inconsisent combinaiton of equations for straight line motion and circular motion. I recommend that you do it all in Cartesian coordinates. In other words, write the equaitons for the x- and y- components of acceleration, and the x- and y- components of velocity, and use those to update the x- and y- position, by Euler's method. If you want to do it in polar coordinates, i.e. using angle and angular velocity and angular acceleration, go for it, but do it right, which is tricky. 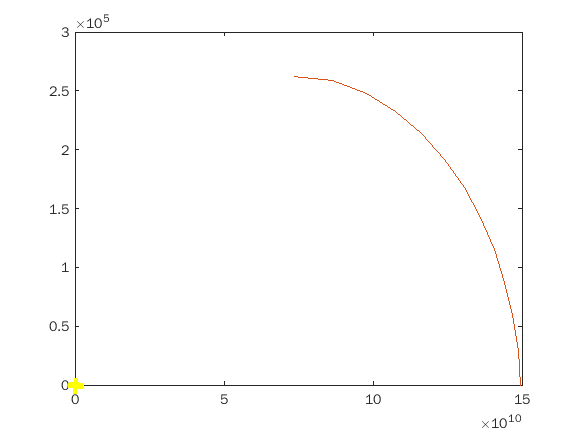 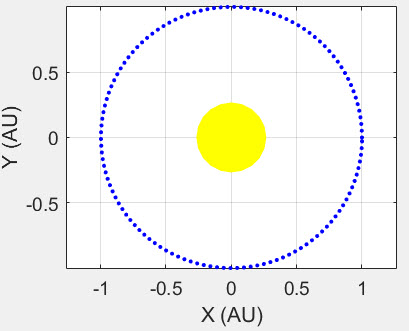 ⋮
Perfect! Thank you so much! really appreciated

⋮
@Roble Noor, you're welcome! Good luck with your work.