Graphs using ode45 do not look like they should. Why is time vector not a linear set?

Josh Ciesar on 12 Jun 2022
⋮
Edited: Paul on 13 Jun 2022
Accepted Answer: Paul
I am trying to solve a system of differential equations of variables x, v, temperature with respect to time. However, when I use the ode45 function it seems like the time values that are not a linear set. When solving the system with ode45 and graphing velocity vs time, this is the graph that is output. 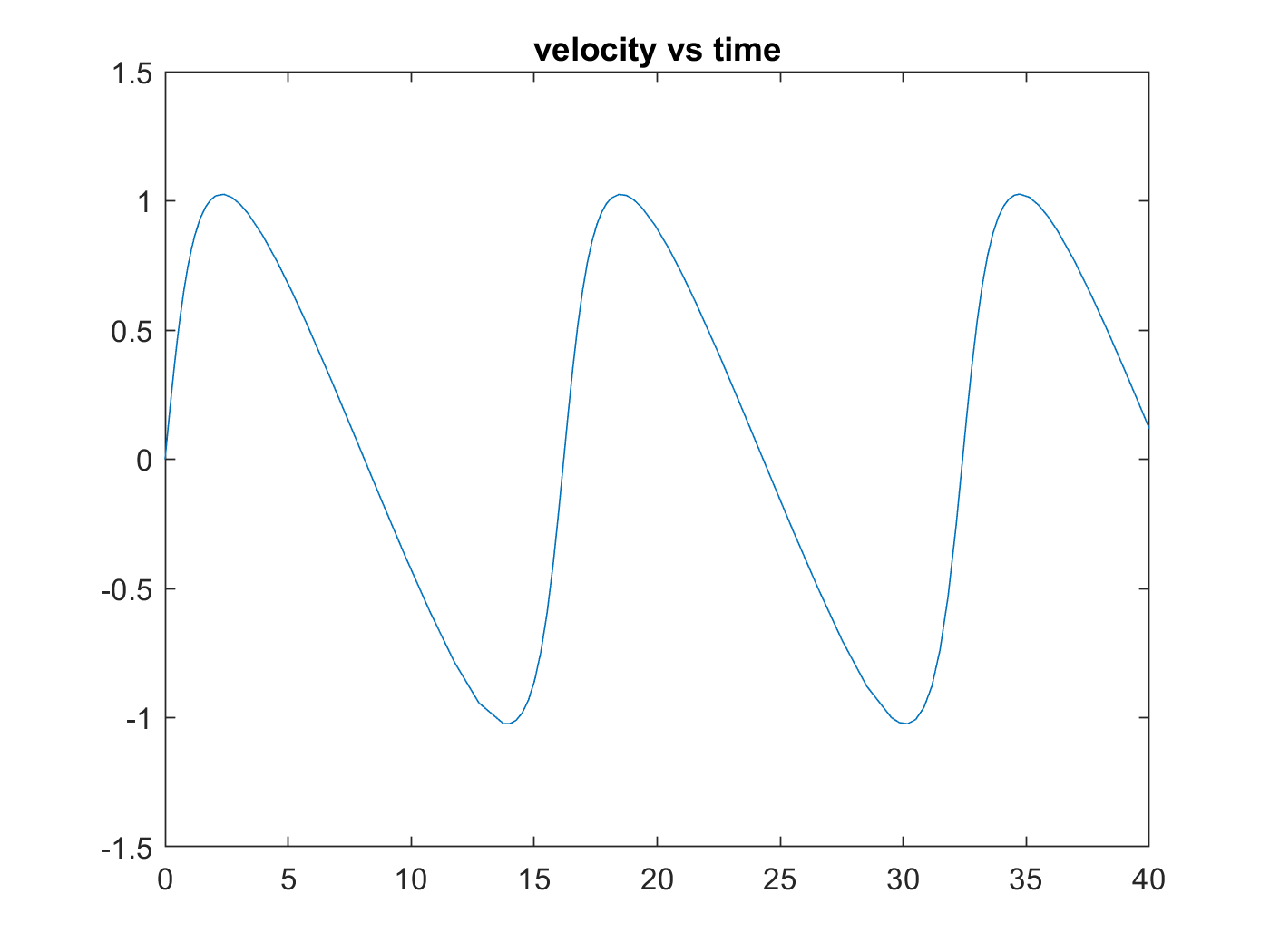 However, when I use the linspace function to create a linear set of data points to use as my time values, I get this graph. 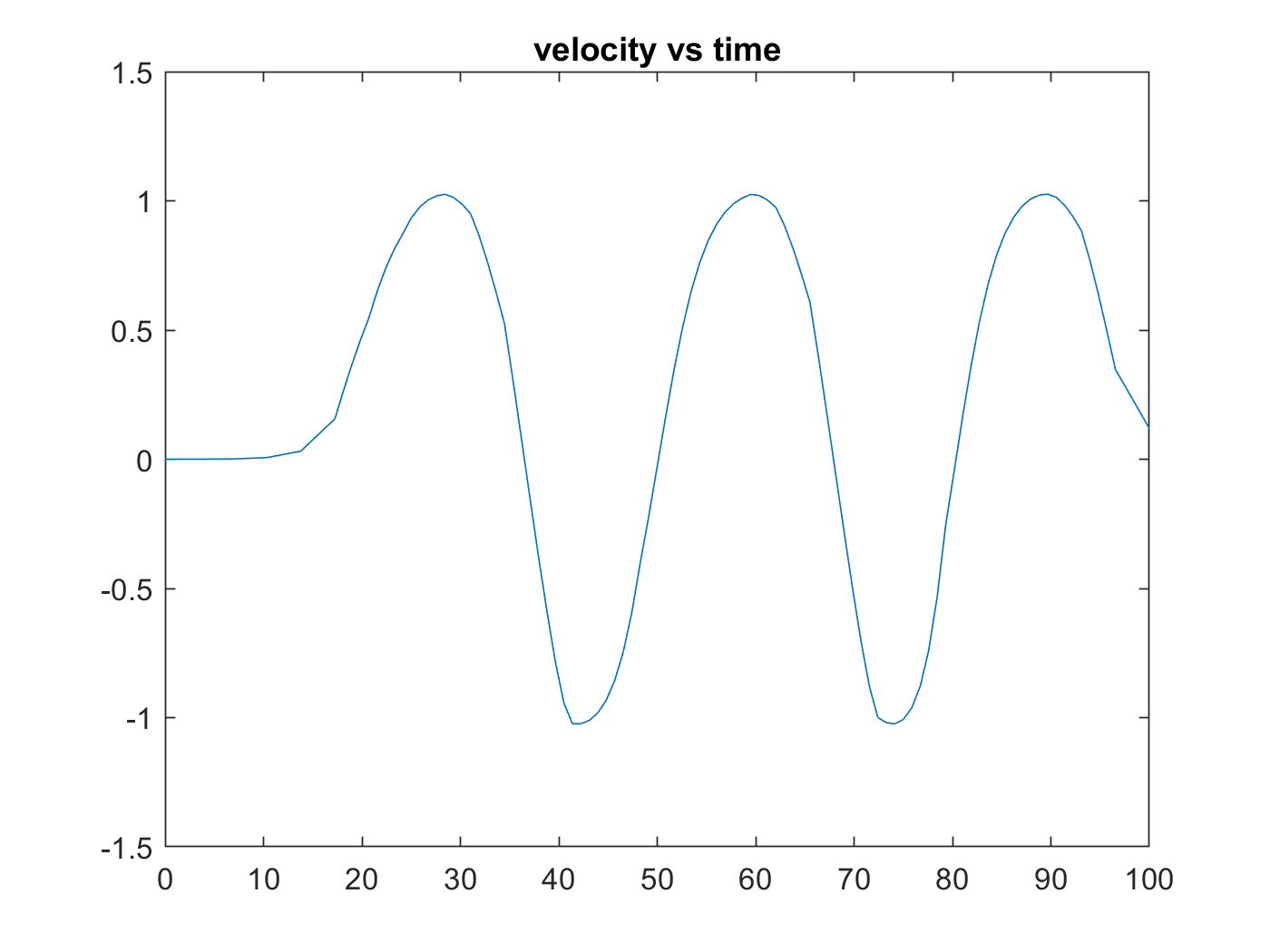 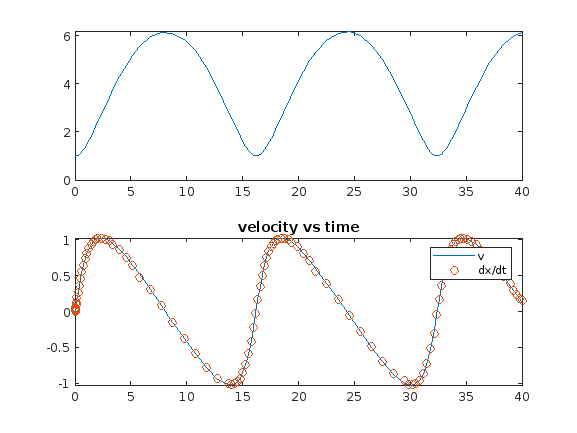 ⋮
You are correct actually. When examining the graphs side by side like that, you can tell that the velocity graph actually IS the derivative of the x, its just that the graph of x vs t looks more even than it actually is. The graph spends more time atits maximum than minimum (the values below ~3 do not last as long as the values above it). Although, this does not really solve my problem. The velocity graph is still supposed to be more symmetrical, so now it seems like the problem is coming from the x values.

⋮
The problem, if there is one, is either arising from the formulation of the problem or the expectations for the result.

⋮
Other than that, it's not clear to me what the expected result should be if not what's shown above.
As far as I understand, a symmetrical velocity field (like the position field) by a suitable change of the differential equations and/or the initial conditions.

⋮
I think you're right. Thanks for the help 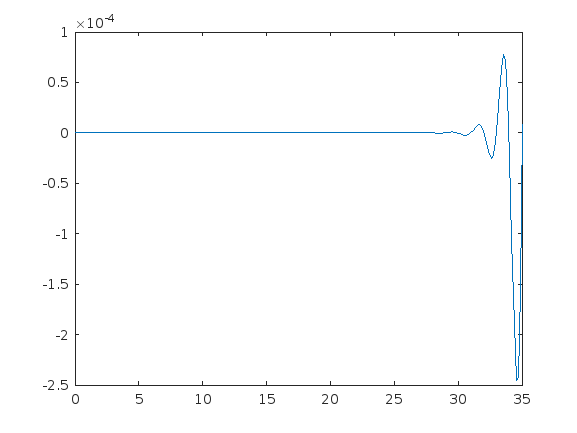 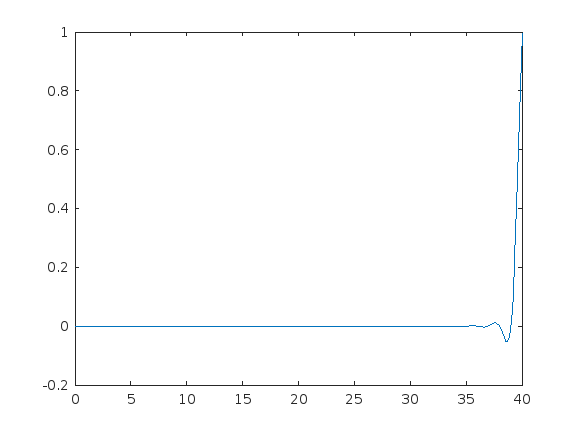 so pretty much flat until t = 32 or so, and then suddenly has a lot of variation.
Under your hypothesis that ode45 should return linear time... then which linear times should it return? When it processes up to 30-ish it can pretty much use points a fair distance apart. It has no idea that it needs to deal with steeper values (which requires points closer together) until it gets up past 35.
So... is your expectation that ode45() should examine the final output that it computes, and then go backwards and "fill in" samples according to the closest sampling that it turned out to need anywhere on the function, for the sake of ensuring that the output times are linear?
Or is your expectation that it will use a fixed timestep? And if so, then what fixed time-step, and what do you want ode45 to do about the locations where the values are changing rapidly where a smaller timestep might be called for?
ode45() is an adaptive ODE solver. Using variable time-steps is inherent to what it does and how it does it.
You have three options at this point:

⋮
It seems like the issue I am having is related more to the way that matlab is solving the ode system, not the time step. When I graph 'x' , the graph looks as expected. When I graph 'v', which I have defined as the velocity of x, you can see that this does not look true based on the graphs. 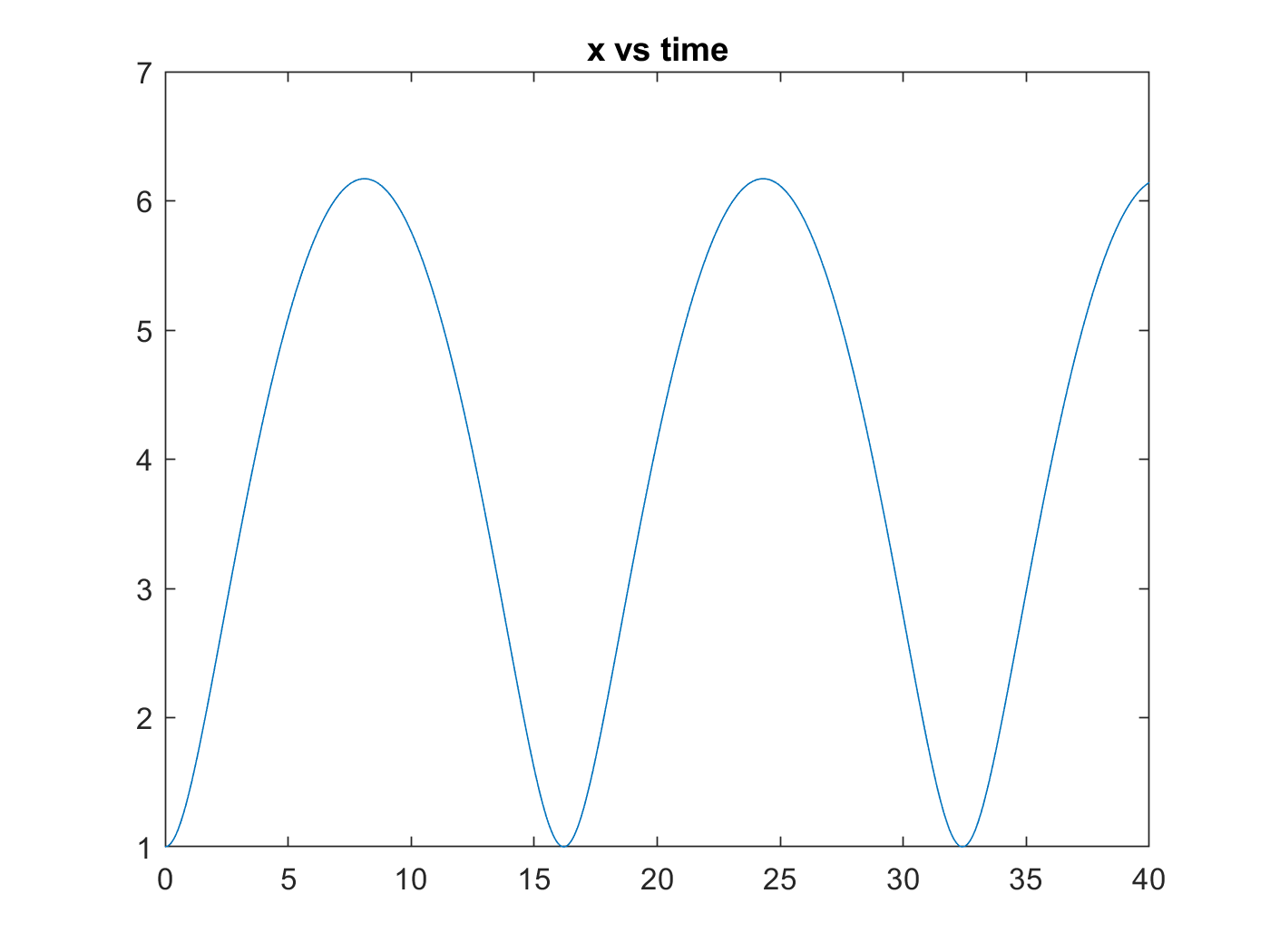 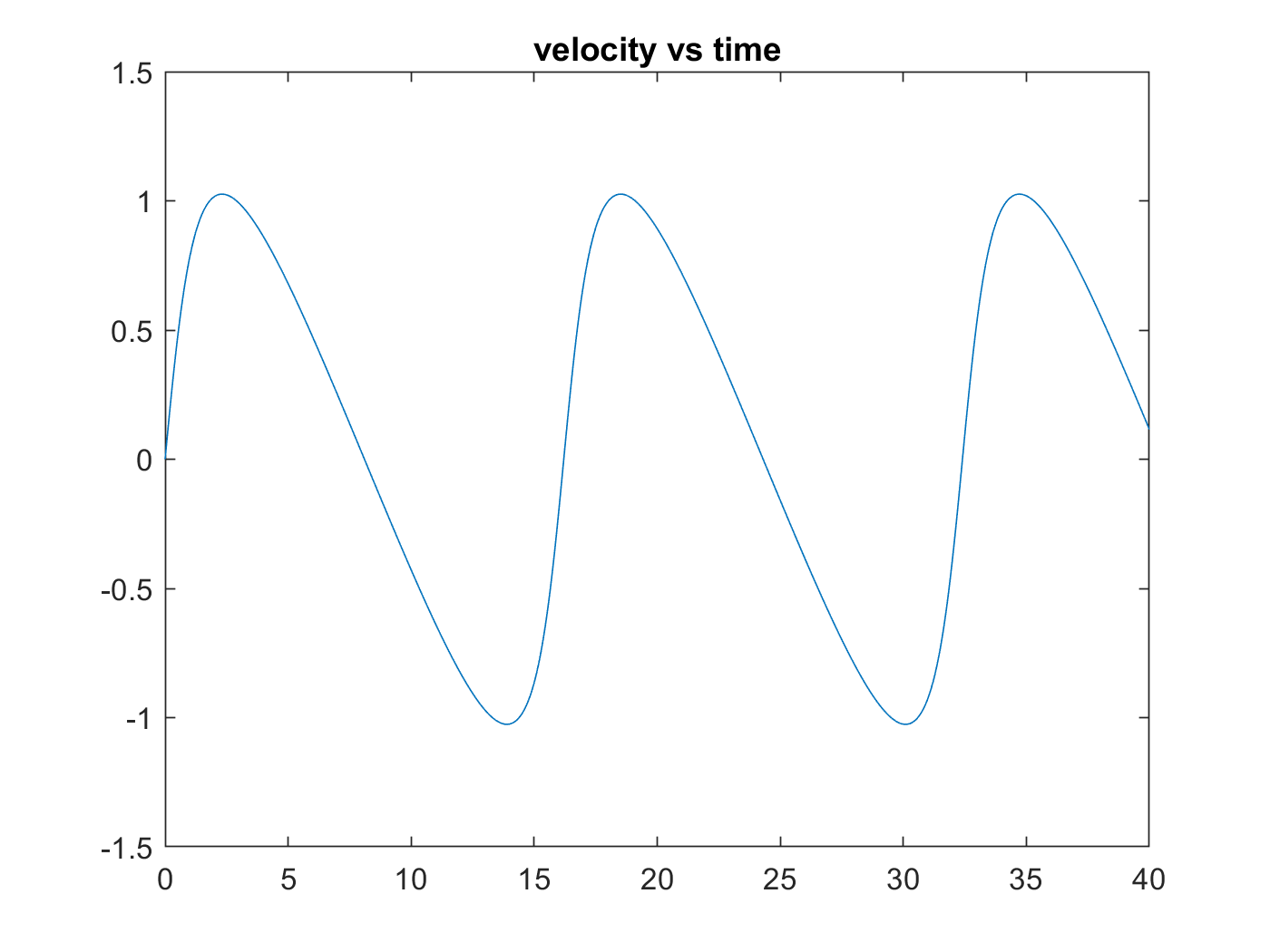 based on information that I have, I know that the velocity graph is supposed to oscillate symetrically. Do you know why this might be happening?

⋮
The points where velocity is zero are the points where position change its direction from up to down and vice versa. This is consistent. So I don't have a doubt that x' = v as requested.