Optimal components for a two-stage heat pump in Simscape

The model I want to replicate looks like this: 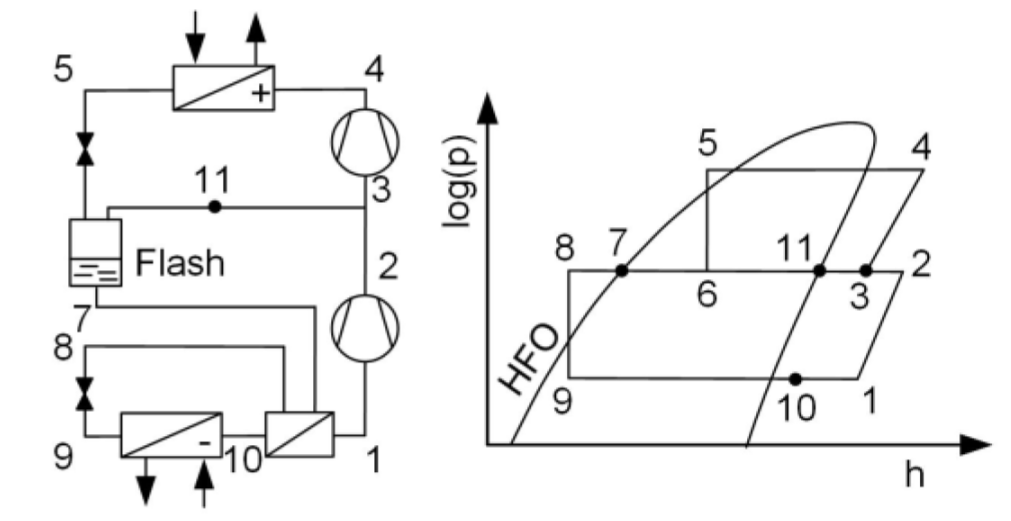 In the case of the flash tank the BV port has no vapour mass flow even though there is vapour inside the tank, as shown in the picture. I tried to occupy a "Controlled Mass Flow Rate Source (2P)" at the outlet of the "BV" port with the mass flow rate measured in "S6", but it did not work (the simulation did not start after compiling). 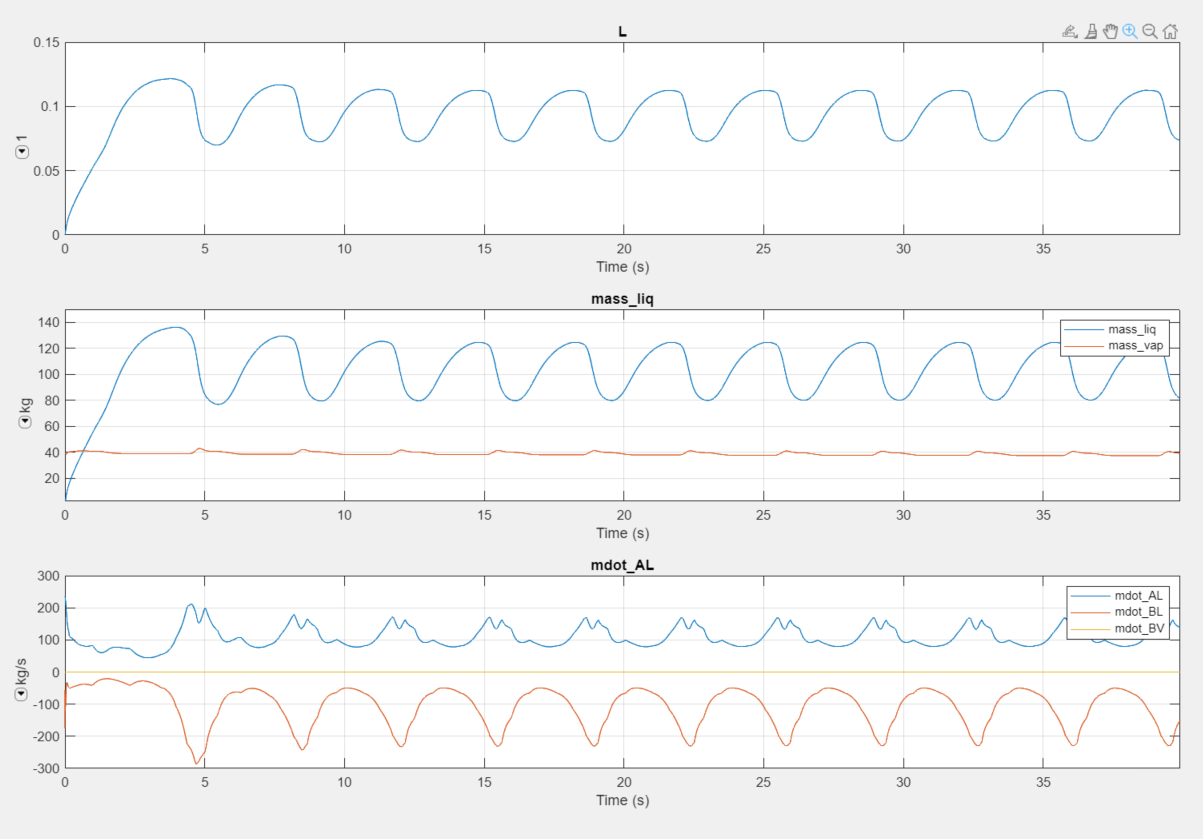 In the case of the expansion valve 2 it is clear that the "S" port is not at the outlet of the evaporator, therefore the control of the vapour superheat is not optimal. Therefore, try to use another type of expansion valve, such as the "Variable Local Restriction (2P)" according to the example "ssc_refrigeration" and the "Pressure-Reducing Valve (2P)". In the case of the first one, there is an error that stops the simulation and in the case of the second one, the results are not very satisfactory.
Therefore I have the following questions:

Yifeng Tang on 10 Aug 2022
⋮
It puzzles me why there isn't a flow out of the BV port of the tank. There isn't a flow into BV port either? The BV port is connected to the outlet of Compressor_S1 and inlet of Compressor_S2, so if the two mass flowrate signals are different, there has to be a net mass flow from the BV port. Or, are the mdot signal different?
Now the expansion valve: you are right in that if it's not a thermal expansion valve in the actual system, you should not use the TXV block. A variable local restriction MAY work, but I've found that the parameters need to be set very carefully. Otherwise you may run into errors like "lower than minimum pressure" or "lower than minimum temperature", when the local velocity and enthalpy calculation somehow leads to an unphysical state. The "Resistance" block doesn't have such issues and is more stable in these cases. However, there isn't a variable resistance block in the library yet. But we can make one using Simscape language :) See attached for a variable resistance block with a cmd for percentage opening. Play with it in a test harness before dropping into your model. I hope the parametrization is intuitive.
To use a custom Simscape block:
Directly as Simscape Component: https://www.mathworks.com/help/physmod/simscape/ref/simscapecomponent.html
Or
Build your library: https://www.mathworks.com/help/physmod/simscape/lang/building-custom-block-libraries-from-simscape-component-files.html

⋮
In your experience is it a good option to use the "Thermostatic Expansion Valve (2P)" in this case (Expansion_Valve_S1) , when the expansion valve is not located directly between the condenser and evaporator, but has intermediate equipment, such as a flash tank or an internal heat exchanger (IHX)?
Or is the "Variable resistance" also better for this case?

⋮
A thermostatic expansion valve adjusts the flowrate so that at the outlet of the evaporator the valve references, there is a few degrees of superheat. If the outlet is too hot/cold, more/less flow will be let through. This helps the refrigeration cycle to operate in a reasonable range. If such a control strategy makes sense for your application, then yes, it's a good option.
The flash tank in your model reminds me of something I've seen in the past. I've encountered cases where a level control valve is used to regulate the flow into the evaporator. The level of liquid in a tank is sensed, and more flow will be let through if the level rises. Typically found in large units like water chiller for buildings.

⋮
I am modeling different configurations found in the literature. So far the nominal state is consistent with the calculations. However, the difficulty so far is to find a robust control system that can operate with data in one year in more complex configurations, as in this case, with a flash tank. This generates, for example, that at times at the outlet of the condenser it is not subcooled or that it fails to stabilize in certain cases.
The control of the flow with the flash tank level is an idea that I can test.

Jonathan SH on 17 Aug 2022
⋮
Thank you very much! I wanted to test the expansion valve before giving an answer. After reviewing the entire parameterisation of the model and the corresponding control, modifying several of them, I obtained satisfactory results.
I still have to check some of the results and the different points, which are not exactly the same as calculated.
One change I made besides replacing the "Expansion_Valve_S2" by the variable Resistance, was to change the "S" port of the "Expansion_Valve_S1" to the output of the IHX.