Not enough input derivatives were provided for one or more Simulink-PS Converter blocks for the solver chosen.

Xiaolin Wang on 30 Jun 2019
⋮
Answered: Luke Halberstadt on 10 Nov 2020
Here is a portion of my simulink diagram. I set my sine wave units in degrees and input handling as below. Simlunk gave me those two errors when running my program.
['testSpinningMassInBall']: Not enough input derivatives were provided for one or more Simulink-PS Converter blocks for the solver chosen. Implicit solvers (ode23t, ode15s, and ode14x) typically require fewer input derivatives than explicit solvers, and local solvers never require any. The following Simulink-PS Converter blocks have continuous inputs. To provide the derivatives required, you can either turn input filtering on or provide the input derivatives explicitly by selecting the corresponding options on the Input Handling tab: ...'testSpinningMassInBall/Simulink-PS Converter' (2 required, 1 provided)
Component:Simulink | Category:Block diagram error
Error evaluating 'StopFcn' callback of block_diagram 'testSpinningMassInBall'. Callback string is 'Elapsed_Sim_Time = toc; disp(['Elapsed Sim Time = ' num2str(Elapsed_Sim_Time)]); '
Caused by:
Component:Simulink | Category:Block diagram error 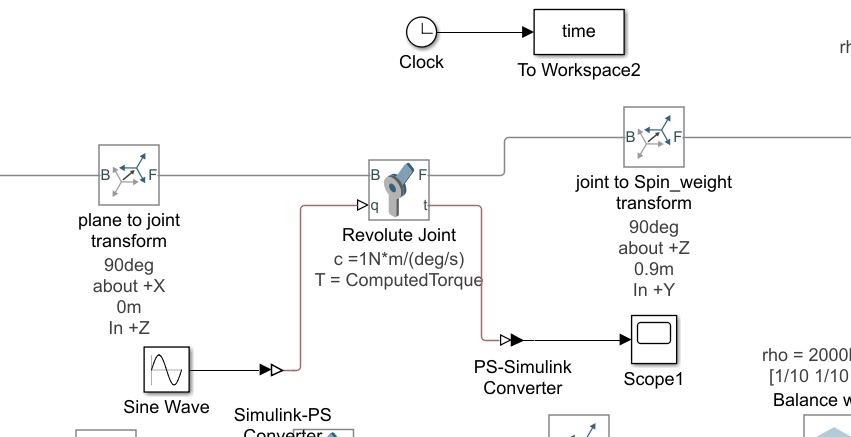 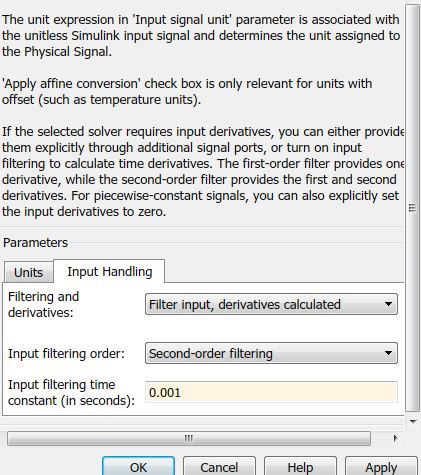 ⋮
Hi,
I understand that you are getting an error in the PS-Simulink converter section and in the StopFcn callback.
Do you have any more PS-Simulink Converters? Also "toc" can only be used with a preceding "tic".

⋮
hello,
you need to expand ps-simulink connector in 3 inputs by using 'provide signals' and 2 derivatives and then you should pass such signal with its first and second derivative, calculated by derivative or integrator blocks, it's like the signal is composed of position, velocity and acceleration.

Luke Halberstadt on 10 Nov 2020
⋮
You have several options for resolving this kind of issue as mentioned in the error message:
Using a simple example model, I found the following working combinations:
Solver ode45 with second-order filtering took 4352 steps (first-order errors out)
Solver ode23t with first-order filtering took 251 steps (second-order is not necessary)
Solver ode45 with two provided derivatives (Cos and Negative Sine) took 79 steps.
To understand the behavior in greater detail, I encourage you to read the following Documentation pages on the Simulink-PS converter and filtering:
Simulink-PS Converter: Input Handling
https://www.mathworks.com/help/physmod/simscape/ref/simulinkpsconverter.html?s_tid=srchtitle#brsaodz-1
Filtering Input Signals and Providing Time Derivatives
https://www.mathworks.com/help/physmod/simscape/ug/filtering-input-signals-and-providing-time-derivatives.html