Jose Ignacio Menéndez Guillén on 1 May 2021
⋮
Commented: Jose Ignacio Menéndez Guillén on 2 May 2021
Accepted Answer: Star Strider
Hi, I'm trying to determine the energy consumed during a hysteresis cycle. That should be the area locked inside a point cloud such as the one in the figure, where two 600 element vectors act as border.
I have tried trapz(H,B), what results in a negative solution, so I was wondering if there was a way of maybe defining the point cloud as a curve and integrating it.
All data comes from experimental results, so I don't have a function to use in integral2.

John D'Errico on 1 May 2021
⋮
Ran in:
As long as the curve is a sequence of points defining the perimeter and they are distinct, you can just compute the area using a tool like polyarea. Or you can create a polyshape, and then compute the area of that curve. Be careful though. You cannot apply any such tool (including trapz) to a randomly sequenced point cloud. They MUST be in sequence around the perimeter.
For example:
n = 100;
theta = linspace(0,2*pi,n);
x = cos(theta);
y = sin(theta);
plot(x,y,'o')
axis equal 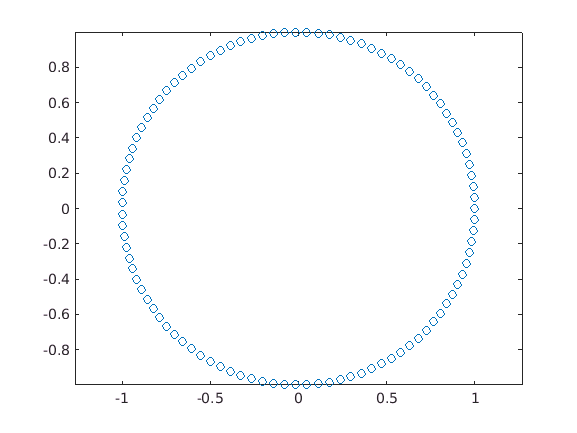 Now compute the area.
polyarea(x,y)
ans = 3.1395
The area of a circle of unit radius would be pi, so roughly 3.14. This will be a slight underestimate, becuase the polygonal region lies entirely inside the circle. So 3.1395 is decent.
The nice thing is polyarea does not care if the sequnce traverses the circle in a counter-clockwise or clockwise manner. That is, the above sequence went clockwise around the circle. So this next area, which is traversed in a clockwise manner, is also positive.
polyarea(cos(flip(theta)),sin(flip(theta)))
ans = 3.1395
And we could have used a polyshape too.
ps = polyshape(x(1:end-1),y(1:end-1));
I dropped the last point from each of x and y there so polyshape would not get upset, since that point is essentially also the first point.
plot(ps)
axis equal

Jose Ignacio Menéndez Guillén on 2 May 2021