Vectors v1 to vd are a basis for a subspace if their combinations span the whole subspace and are independent: no basis vector is a combination of the others. Dimension d = number of basis vectors.

OK, so I have to explain independence, basis, and dimension. Dimension's easy if you get the first two. OK, independence. Are those vectors independent? Well, if I draw them, in three dimensional space, I can imagine 2, 1, 5 going in some direction. Let me draw it. How's that? 2, 1, 5, whatever! Goes there. That's a1. OK.

So their combinations give me a space. The combinations of a1 and a2 give me a plane, a flat plane, in three dimensional space. That plane is, I would say, they span the plane. a1 and a2 span a plane. And here's the key word: span.

So there are two vectors. They're in three dimensional space. And the plane they span is all their combinations. That's what we're always doing: taking all the combinations of these vectors. OK.

They would span the plane still. Their combinations would still give the plane, but they wouldn't be a basis for the plane. a1 and 12 and a3 together, that's too much, too many vectors for a single plane. The vectors are dependent. And we don't-- a basis has to be independent vectors. You have to need them all. We don't need all three here.

So that's a dependent one. It can't go into a basis with a1 and a2 because the three vectors are dependent. Now let me make a difference choice. So that one's dead. That did not do it. All right.

So let me write down that example again. A was the matrix 2, 1, 5, 4, 2, 0, 1, 0, 0. So I believe that matrix has independent columns. So its column space is the full three dimensional space. It's null space only contains-- let me put it, make that clear that that's a vector. And now I'm ready to write down the idea of a basis.

By the way, if the column space is all a three dimensional space, as it is here, that's a subspace too. It's the whole space, but the whole space counts as a subspace of itself. And the 0 vector alone counts as the smallest possible. So if we're in three dimensions, the idea of subspaces has-- we have just the 0 vector. Just one point. That's a smallest.

And now I wanted to say something about dimensions. OK. Dimension. It's a number. It's the number of basis vectors for the subspace. Oh! But you might say, that the subspace has other bases, not just the one you happen to think of first. And I agree. Many different bases. For this example, all I need to get a basis for, in this case, for three dimensional space is I need three independent vectors. Any three.

But the point is, the point about dimension is that I need exactly three. I can never get two vectors that span all of our three. And I can never get four vectors that are independent in our three. If I have fewer than the dimension number, I don't have enough. They don't span. If I have too many, than the dimension, they're dependent. They won't be independent. They can't be a basis.

Every basis has the same number. And that number is the dimension of the subspace. All right, let's just take an example, just with a picture. I'll stay in three dimensional space, but my subspace will just be a plane.

So here every basis for this plane contains two vectors. Always two. And that number two is the dimension of a plane. Well, I'm just saying the plane there is two dimensional. It's not the same as r2. it's not the same. That plane is a plane in r3. It's not ordinary two dimensional space. But its dimension is two because it takes any vector. And if I didn't like the looks of this one, well, that's no problem. Let me go that way. That's just as good.

Those two vectors are independent. They span the plane. They're a basis for the plane. The plane is two dimensional. That's the set of key ideas. Independent. Span. Basis. Basis is fundamental. Basis is a bunch of vectors. And dimension is how many vectors. 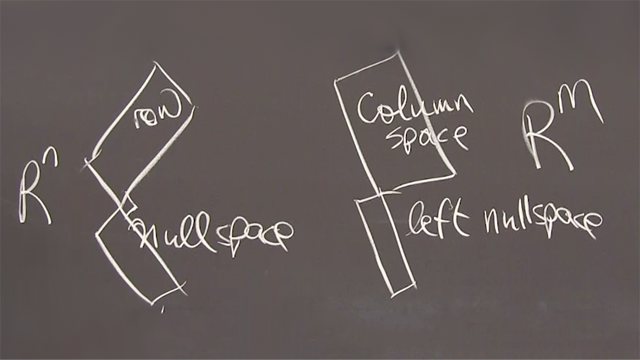