Why can't I activate MATLAB or start the network license manager in a newer Linux environment?

MathWorks Support Team on 22 Nov 2022
⋮
Edited: MathWorks Support Team on 22 Nov 2022
For MATLAB R2014a and later, licenses can be activated to devices using the Consistent Network Device Naming convention. For MATLAB R2013b and earlier, licenses can be activated on a machine with no eth0 using a udev rule to rename the device to eth0.
udev rules are constructed as a series of matching conditions and action commands. When a device matches all of the conditions, the assignment commands will be executed. udev rules are stored in /etc/udev/rules.d and must have a .rules extension. They are read and processed in lexicographical order. The udev rule to change the Network Interface Card's will typically be named 70-persistent-net.rules
The simplest udev rule to change the name of an ethernet device, with MAC address xx:xx:xx:xx:xx:xx, to eth0 will be:
ATTR{address}=="xx:xx:xx:xx:xx:xx", NAME="eth0"
There are other methods of changing the name of the ethernet device, but many of them are distribution specific and can not be guaranteed work on all distributions. udev rules take priority on all systems running the udev framework.
If you would like more information about this naming convention change please take a look at the following link:
http://www.freedesktop.org/wiki/Software/systemd/PredictableNetworkInterfaceNames/
For releases R2008b and earlier MATLAB must be locked to an eth0 device.

⋮
Is there a way to do the activation that does not involve changing the system configuration. Renaming the network interface may require reconfiguring other parts of the system, which is not ideal.
Thanks!

⋮
My understanding is that it depends upon the MATLAB release, that in sufficiently new releases, it scans the ethernet table at the time of activation and registers all of the interfaces that exist at that time, by MAC address.
I could be wrong on this as I have not installed MATLAB on a Linux system for a while.

Krish Pillai on 3 May 2016
⋮
Edited: Walter Roberson on 3 May 2016
I ran into the same issue while attempting to reinstall Matlab 2010b on a Fedora 20 (3.19.5-100.fc20.x86_64) system. The reinstall failed after Fedora was upgraded.
Symptom:
Activation fails with the following error:
"Error 1,714. Unable to activate your machine. This activation process cannot detect a valid Hist ID which utilizes a currently supported naming convention. Please refer to the following solution ID to help resolve the issue 1-661QJD"
Reason:
Apparently, Matlab is looking for an eth0 device and fails to find it. This was confirmed by Matlab Technical support Case Number is 01379776 and I was directed to this site. The accepted answer at this site did not work on Fedora 20, and hence this comment. It did help me find a solution.
Observations:
My configuration uses and ASROCK X-58 Supercomputer Motherboard with 2 on-board ethernet devices.
Fedora 20 systemd supports BIOS provided numbers and if that is not supported it looks for a higher level scheme provided either by PCIe index numbers, or if even that isn't available, it resorts to geographical location numbering.
Typically biosdevname makes naming consistent by referring to embedded devices as em[123..], PCI cards as p<slot>p<port> etc. And on the target machine, the ports were being numbered em0, em1.
The recommended steps using dev rules did not work since the 70-persistent-net.rules didn't exist and udev rules created were being ignored.
Solution:
The following did work. The package biosdevname was removed with "yum erase biosdevname"
"biosdevname=0" was added to kernel boot arguments in /etc/sysconfig/grub .
Adding this to kernel boot args is probably an indication of paranoia, but in case biosdevname gets reinstalled, you don't want the device names to get changed.
Removing biosdevname alone won't suffice since the system will now fall back to geographical numbering and start numbering devices as enp2s0 etc, if you were to reboot. To stop it from auto naming entirely, also add the following to the kernel boot argument "net.ifnames=0".
A sample entry in /etc/sysconfig/grub that disables biosdevname, the nouveau driver and ifnaming is as shown:
GRUB_CMDLINE_LINUX="rd.lvm.lv=fedora00/root vconsole.font=latarcyrheb-sun16 rd.lvm.lv=fedora00/swap $([ -x /usr/sbin/rhcrashkernel-param ] && /usr/sbin/rhcrashkernel-param || :) rhgb quiet rd.driver.blacklist=nouveau biosdevname=0 net.ifnames=0"
There is some overlap in functionality between biosdevname and ifnames and how udev/rules are used, and it would probably go away once Fedora cleans it up.
Run "grub2-mkconfig -o /boot/grub2/grub.cfg" to generate a new grub.cfg. Don't reboot yet.
You have to rename your network scripts in /etc/sysconfig/network-scripts/ifcfg-em* to if cfg-eth* and edit them so NAME="em*" reads the corresponding "eth*".
Now reboot and confirm your devices show eth* (use "ifconfig -a").
If you do figure out a more optimal way to do this, please let me know or post it here.

⋮
Thanks for writing that up!

Peter O on 22 Nov 2017
⋮
It was kind of Walter Roberson to write that up, but I think most users don't want to alter their systems and trigger who knows what else.

⋮
It was Krish Pillai that wrote all that up. 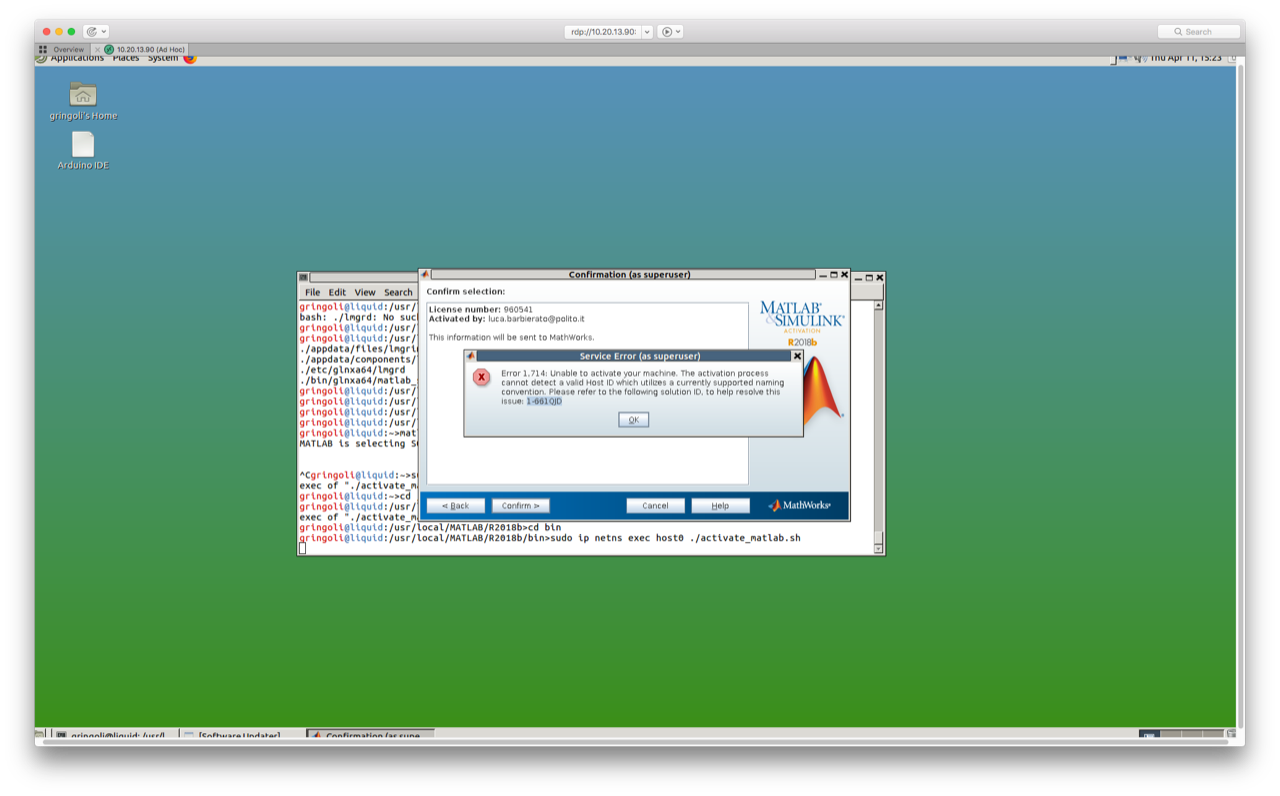 I sincerely don't know how to solve the problem.
Somebody could help me?
Kind regards,
Luca

Ari Gudmundsson on 10 Nov 2020
⋮
Dear matlab, it's hard for me to describe how ridiculous this is without resorting to vile language. Please .... fix this, why would you ask me to change my usb connection to ETH0? WHY? This is like, three lines of code maximum, you could just fix it, and not make life hard for all of us. why do you want to make it so hard for such a meaningless thing. First I download 2008, and the libXp.so.6 is depreciated and unstable, so, fine. I guess I need something newer. But this takes the cake. 2010b literally works perfectly except for YOUR .... mess.
Just fix it, it would seriously take less than 1 hour by 1 engineer. just don't demand it being called a specific name, why did you even ask for it in the first place???? WHAT IS WRONG WITH YOU!?

⋮
They already fixed it, in a later release than you are using.
It would be expensive for Mathworks to go back and create patches for all old versions. Mathworks does not even host the documentation for releases before R2015 any more.

⋮
Sir, the fact that this isn't specified even within the installation guide, warning you not to download this version for a modern linux system, or offer a modicum of helpful tips regarding what is glaringly a common complaint means I have wasted valuable time, data off my internet plan and goodwill towards Mathworks. It would take me less than 5 minutes to append a suitable warning.
I am using Matlab because that's what the university demands. Students like me will run the university and all the companies on the market in just a few years. Mathworks best defense is to pretend there are no alternatives, and no software can do what they do. That's just not a good long term strategy, because it's not true.
I'll expect you to remove this comment, that's fine, but send this message up to whoever keeps making these terrible decisions.
Have you seen the system requirements of Octave? How are you this bloated? You're giving this software to programmers!

⋮
R2008a was not supported on any "modern linux system".
Predictable Network Interface Naming was not added to udev until v197 in early 2013. https://lwn.net/Articles/531850/
MATLAB added support for that as of R2014a; https://www.mathworks.com/matlabcentral/answers/100235-why-can-t-i-activate-matlab-or-start-the-network-license-manager-in-a-newer-linux-environment?s_tid=srchtitle

⋮
this is exactly what I'm talking about, just specifying these things in the download section would save Matlab the hassle of losing more customers.
I imagine Matlab is probably a reflection of Mathworks, a bloated beurocracy, with individual departments competing against eachother, with no intention of making things easier for the user.
Any sane system of operation would try to minimize work done, not maximize it. Instead of having a really successful helpdesk, make it so that the customer doesn't need help.

⋮
When you use the download link https://www.mathworks.com/downloads/ and select a MATLAB release, in the upper right corner there is a link to System Requirements for the release.